“Jade what the heck is going on?”

Jade’s mind had gone instantly blank and not knowing how to react, she took her time putting away her book in an effort to stall and gather her thoughts.  The moment she heard his voice, a somewhat terrified excitement bubbled up from her toes.  Be cool, she remined herself and remember you let him go.  Stick to it.

“Why am I here?  Are you serious? Why am I here! Jade, I’ve been looking for you for the past two months.  I’ve been all over this country trying to find you,” Travis replied.

Jade stared at him not knowing what to say.

“I told you I needed time Travis. I-“

“Time is not total silence for 8 months!  Not even a dear John letter to say goodbye, have a nice life?”

“We said goodbye on the beach.”

Travis leaned forward and pointed at Jade quite firmly.  “NO!  You said goodbye!  I left at your request with the understanding that we would still talk and see each other.  I knew you needed time Jade, I just didn’t figure you for a coward!”

Jade openly gasped at his cutting words and tears welled up in her eyes.

Travis leaned back and pointedly looked past her out the window.  Taking a deep breath, he leaned forward and lightly placed his hand on Jade’s.

“I’m sorry.  I didn’t mean to be so cruel. I’ve had two months of frustration and bottled up feelings.”

Jade flinched, not at his words but the weight of his hand on hers.  She slowly pulled her hand back and laid it in her lap.  Once she was free from his touch, his words finally were heard.  She knew they were true and he had every right to feel that way.   Hadn’t Sun basically said something of the same to her?  She turned from the table, trying to decide if this was the moment she got up and walked away forever.

Travis stood up and moved his chair in front of Jade to get closer to her and block her exit.  He could see the emotions crossing her face as she stroked the palm of her hand.

As Travis leaned forward, his pleasing scent filled her with butterflies all over and it was hard to push back the feelings she had struggled to forget all this time.  Gone was the boy she had said goodbye to on the beach and here sat a man, a beautiful sexy man.

Travis reached out to touch her hands and Jade jerked away from his touch.  He leaned back away from her to put some distance between them and help her feel more comfortable.

Jade began shaking her head then glancing up at him in tiny glimpses.

“I’m damaged goods Travis.  I won’t ever be the same person you used to know.  I figured it was easier just letting you go.  I thought if I stayed away, kept you away from me, you would move on and forget me.”  A single tear rolled down her cheek.  Travis resisted the urge to brush it away with his finger tips, much the same way he wished to brush away her fears.

“Clearly,” Jade interrupted while staring at her hands.  “You never would have spoken to me like that before and now you’re so,” she held up her hand in a waving motion towards Travis, “much bigger than you were before.”

“Don’t you think I know that?” she firmly cried.   “My head knows all kinds of things, but my body, well it has different ideas.  You need to find someone without all this,” she indicated by pointing at her head.

“Aren’t you listening to me,” Jade said quite boldly, staring at him directly in the eyes. “I don’t know if I will ever be a normal person again.”

“You will.” Travis responded softly.   “It’s a journey you are on now and usually those go much better with a person you trust.”

Jade laughed sarcastically.  “Since when did you become cheesey?”

Travis smiled.  “Oh, I guess over the past two months looking for you.”

Jade swallowed and took a few moments to collect herself.  She wanted to run, cry, laugh and jump for joy all in the same moment.  She held all the emotions back, not fully aware which one was right at this moment.

She spoke slowly.  “So.  Did you really, look for me for the past two months.”  She smiled a little at Travis.

“I did.”  He stood up and slowly pushed aside the table.  He carefully held out his hand to her.

“And if you take a walk with me, I will tell you all about it.”

Jade looked towards his hand, then delicately placed her hand in his. 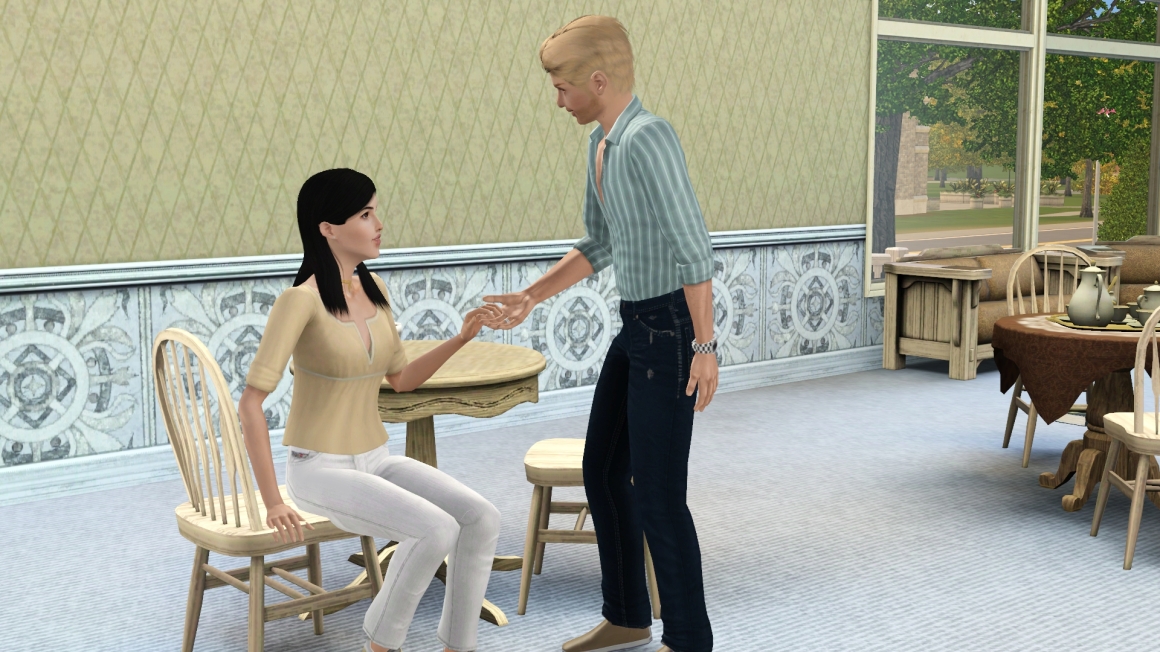 Travis stepped back and she rose to stand next to him.

“And you are so beautiful.”

“Can I hold your hand?” he asked shyly.  Jade responded by slowly nodding her head.

Together, they walked all over the very small village of Montreysor, while Travis took her through his many ups and downs over the past few months.  He was pleased that she allowed him to hold her hand during their entire walk, but noticed if he came too close to her, she would sidestep over and away from him.  He placed his steps to keep what he thought was a safe distance from her.

As they were reaching the bridge of the castle, Travis was just telling her about the national museum of scientific and industrial instruments he had seen in Paris.

“Most amazing thing I ever saw!  Truly fascinating all the history.”

“We’re here,” Jade sighed.  She looked to the ground, then back up to him.

“I had a nice time,” Travis said, interrupting the awkward silence.

Jade laughed in response.  “How could you?  All we did was walk and you talked.”

“Yes but I got to walk and talk with you.”

“There you go being cheesey again.”

“Yeah, I’m never ever like this.  It must be you that brings it out in me.”  Travis smiled widely with teasing eyes.

Jade smiled back but it was quickly replaced by a look of concern.  “Travis.  What happens now?”

Travis sighed.  “I don’t know.  I guess that depends on you.  I basically forced my way into your life back on the island, but I won’t do that again.  If you don’t want me to stay, I will leave.”

Jade took a moment to look away from him and think.  “Would it be okay to say, I don’t know what I want?”

Not the response I was hoping for, Travis immediately thought in his head.  “Yes,” he replied.

“Thing is,” Jade started to say, “the thought of you leaving and never seeing you again makes me feel completely anxious.  I didn’t realize how much I was holding in until I heard your voice.  Saw your face.”

Travis reached up to place his hands on her shoulders and Jade instinctively stepped back.  Realizing what she had done, she stepped forwards again.

“See!  That is what I am talking about!  I don’t trust anyone and I certainly don’t trust myself.  You deserve so much better than this,” she cried with a frustrated tone.

“Then we will start slow, until you trust me and yourself again.”

Jade shook her head and began to fidget quite anxiously.  “I need to walk.  I can’t stand still.” She pivoted and made her way around the edge of her property, walking at a fast determined pace.

Travis followed silently beside her.  Suddenly she stopped.  “I thought your hair was blond.”

Travis reached up and touched some strands.  “Being on the boat out in the sun lightened my hair, so I was blond when you met me.  Since then I’ve been locked in classrooms for more than half a year, the blond grew out.  Strawberry blond is my natural colour.”

“Oh,” was all she said before walking again. 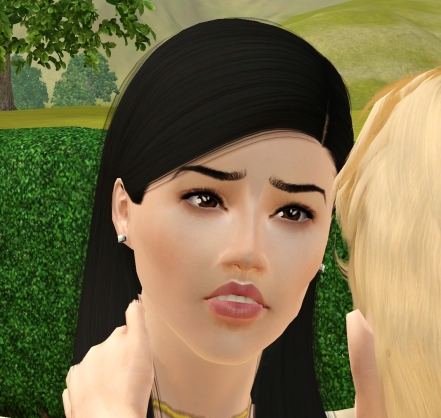 A few moments later, she stopped again.  “Are you going back to school?”

“Then no,” he answered in return.

“But what about school?”

“It can wait,” he replied then shook his head when Jade began to protest.  “I’ve been looking at other options near by.”  Travis watched as Jade thought about his words.  “How long are you staying in France?” he countered.

“Travis, do you know what you are doing?”

“Well, I have an idea where to start.”

Jade reacted with a swift and startled gasp as Travis raised his left hand in front of her, but she did not jump back. 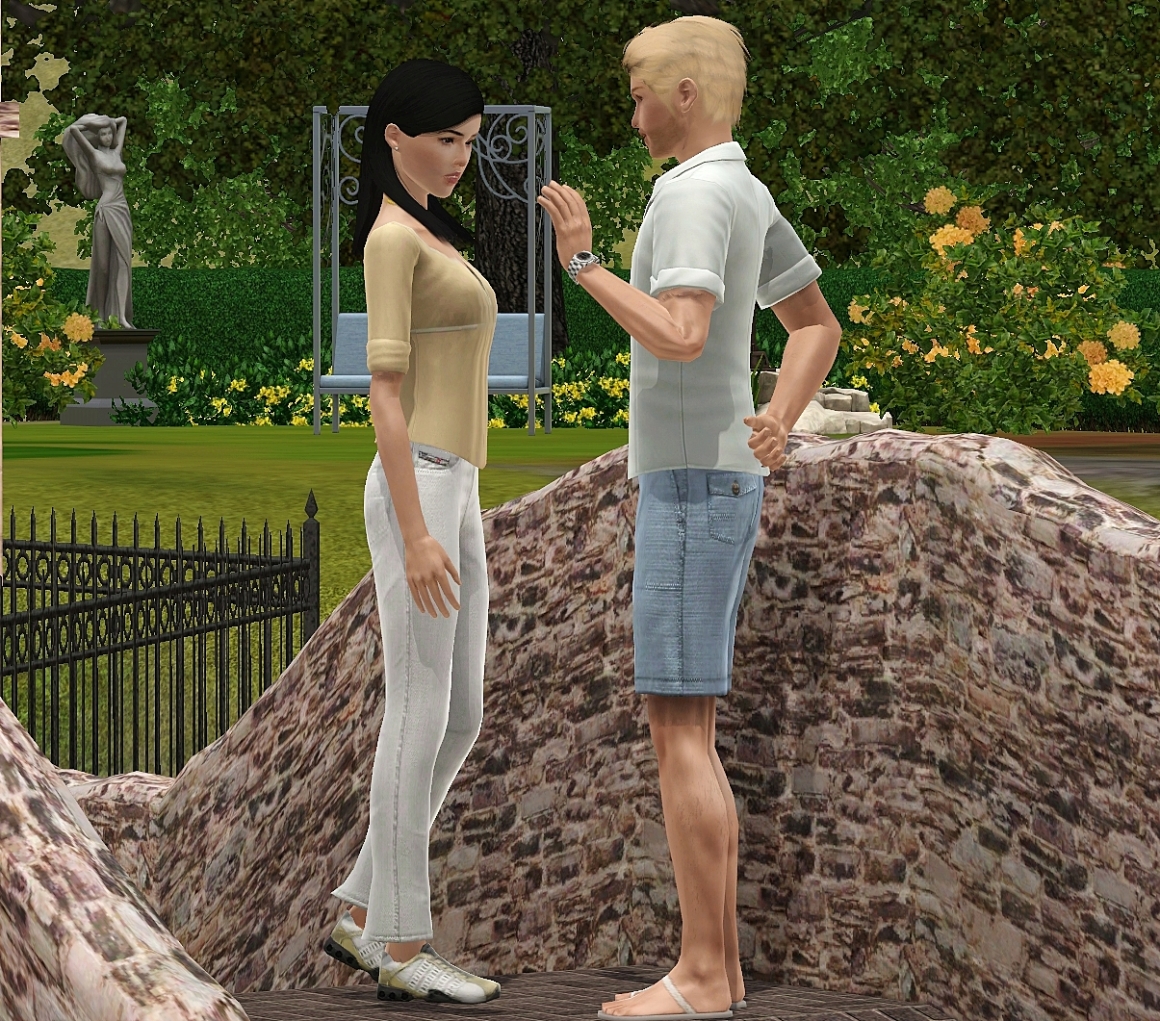 She was frozen as she focused on his hand.

“It’s only me,” he whispered softly to her. 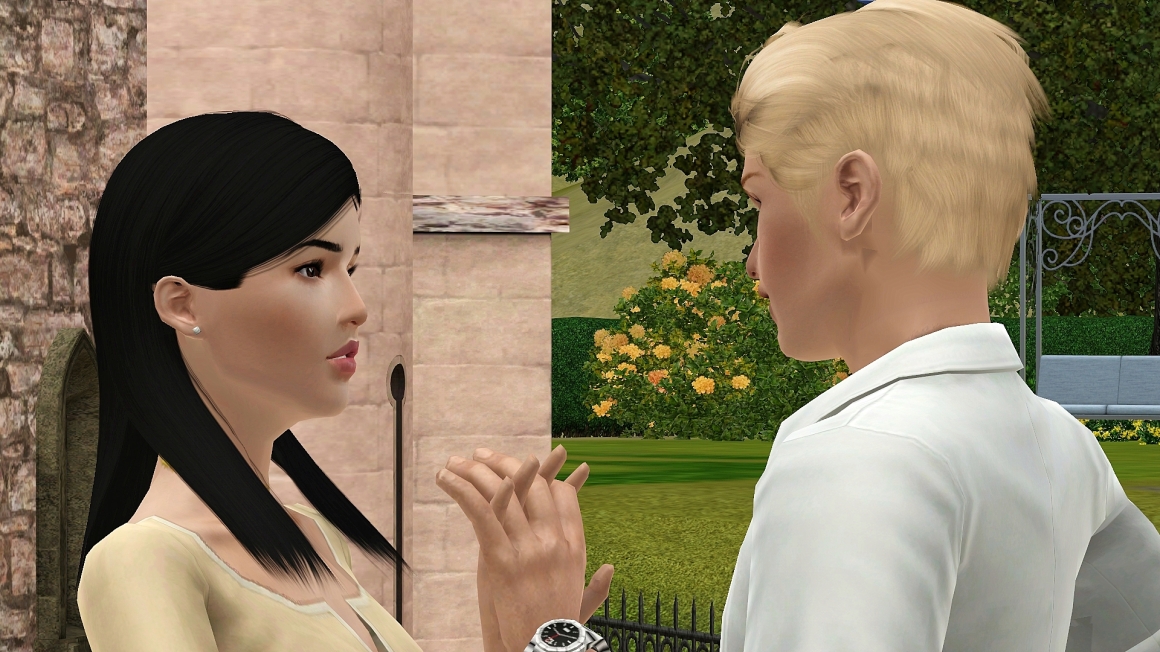 This is the end of Gen 2 Jade!  However don’t worry, we will see Travis and Jade again. Together or Apart…we shall find out as the story progresses.  Next chapter, we are on to the quads!

I have a new pose set Meeting At the Cafe

17 comments for “Together or Apart?”