I turned to see Jin running towards me with a wide-eyed expression on his face.

“What?”  I turned to look at the lighthouse, suddenly fearful it was about to topple down on us.  Just as I turned back, Jin scooped me up and spun me around laughing.

Later that week, we were roasting marshmallows on the beach when Sun quietly asked, “Why lighthouse for a password? Other than the obvious that we have a lighthouse on the island.” 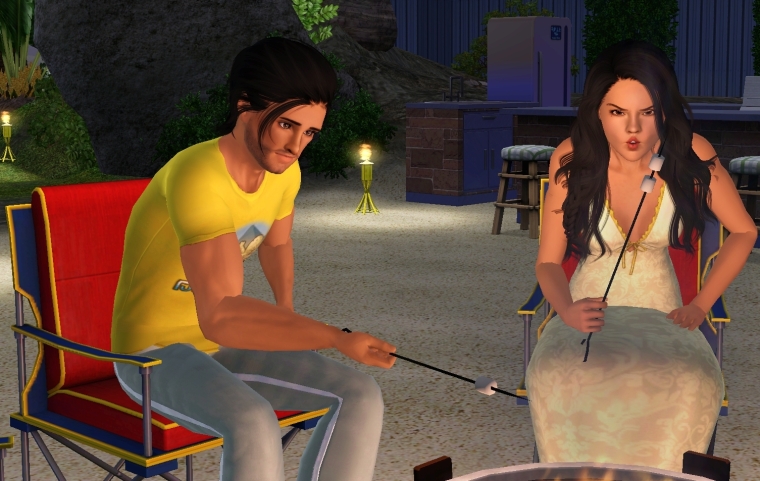 “Oh it goes way back to when I was a child.  When we moved here, the island was occupied by three horses.  Two adult horses and one was a foal that I had named Socks.  Well, you know my dad’s best seller the Pink Full Moon?  It was based on one night here on the island when the sky was the pinkest we had ever seen it, the moon was so big and bright, you felt you could reach out and touch it.  Socks had taken refuge in the boat, scared by all the strange happenings around the island. Dad allowed it, but the next day a terrible storm came through the area and I asked if Socks could stay inside with us.  He said no.”  I stopped and shook my head remembering just how angry I had been.

“Well dad and I were known to butt heads from time to time and I could be a bit of a stubborn brat at times.  Anyway I was so angry, I booby-trapped my dad’s computer and when he found it….well lets just say it was the first time I had actually seen my dad mad; really mad!”

“I hid up in the top floor of the lighthouse for quite some time to allow his temper to cool down.  Not that I thought my dad would hurt me or anything.  I knew what I had done was wrong.  Dad had been working for two days on that new book and I could have lost all his writing by messing with his computer.  I still feel really bad about that to this day.  He cooled down, I was majorly grounded. I was never allowed to use my dad’s computer after that, so I never knew he had password protected it.”

“What happened to the horses?”

“I don’t know actually.  Not long after that I woke up one morning and they were gone.  My parents told me their owner had come to take them home in the middle of the night.”

We sat there quietly roasting marshmallows until Sun began to giggle.

“Oh I dunno.  I’m just imagining you as a child, trying to find somewhere to hide from your father, and deciding an all glass room was the best place to go.”  Then she out right laughed.

“Hey!  I was just a kid you know,” then I threw a marshmallow at her.  She threw one back at me and thus began the marshmallow war on the beach that had us laughing and acting like kids again.  It felt good laughing with her this way.  Like there was still hope for us and things really would be okay.

If you haven’t read these chapters, you are missing a big part of Jin’s childhood and his stubborn bratty ways!  You may want to look back and see what he was up to then.

A big shout out to RosemaryMarie, for helping to me to figure out the perfect password for Jin to figure out!  She is my number one fan, who at times, knows this story better than I do! Thank you lots and big hugs!

Check out her story here:

A new chapter will be coming soon for Jin, Sun and Jade.  My apologies to everyone but we are under construction, both in our area and in our own house.  Between internet outages and the power being off in our house for the past week or two, writing a chapter just wasn’t possible.  I will try for the next chapter to come out next Saturday at the regular scheduled time 11 a.m.  See you soon!