Just a reminder that if you haven’t read the last chapter, The Mystery Is….  you will want to read that one first.

(Must have been a spec of dust on the camera lens directly over my face!)  Took forever to set up this pic, as the todds wouldn’t sit still, they wouldn’t look at the camera.  I’m telling you, trying to get 12 sims looking at the camera all at once was the hardest thing I have ever done. As you can see the three oldest boys are now teens.  Foster looks just like his dad, Oren looks like his mom and Dain has a little bit of both.

Hmmmm,  you may be a bit confused right night so I guess I should really back up and tell the rest of the story first.

I arrived in Isla Paradiso, to find my family happy and well.  Even though, Caerul was still reeling from the information he learned from Honor and Travis about his parents, he seemed to be coping very well.  He felt incredibly guilty for not trusting or believing in me as his wife had done.  I felt equally as bad for not being able to tell him I was working undercover.  I believe from that, we came to a new understanding and closeness in our friendship, than we had ever experienced before.

Here in Isla Paradiso, with my two best friends, five nephews and four nieces, I felt like I was where I belonged.  Home at last.  I was really glad I had come as well, for with the loss of financial support from Caerul’s parents, he was working harder than ever and therefore never home.  Cameron’s parents had sold a couple horses to help build the family a home.  I had yet to find out which horses they sold (I know which one I would sell in particular) but I know that Cameron felt incredibly sad to see any of them go.

Funny enough, Cameron and Caerul so loved the house in Monte Vista, that they built the exact same one here with a few minor improvements and slightly different decor. 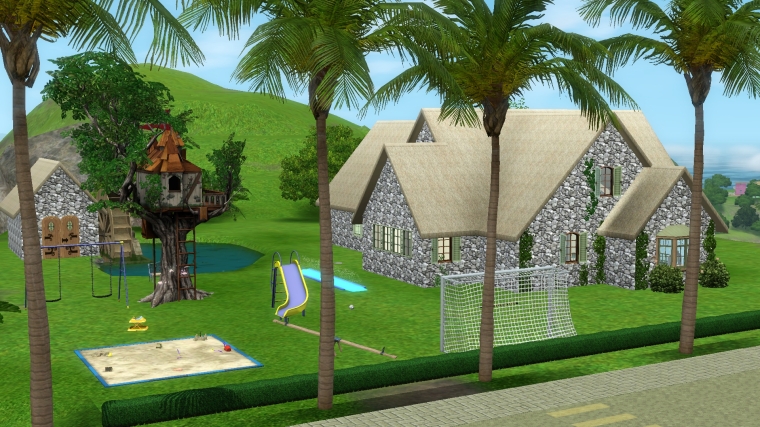 When indoors, I had to remind myself that we weren’t “back there” anymore.  It was far from being done, but they didn’t mind.  They were just happy to be together in this beautiful new world with the knowledge that everyone they loved was safe.

Oh and speaking of those minor improvements, here are some: 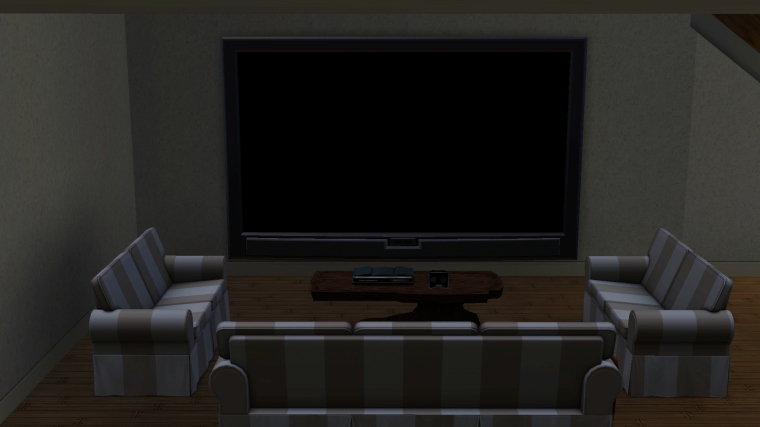 Turns out Caerul just couldn’t completely commit to being a “real fairy”, whatever that meant in his head!  Once he moved to IP, he decided living without power was for the bugs, which meant the house got a full upgrade. Hey, I’m not complaining that’s for sure!

Anyway, as I was saying, with Caerul working hard to support his family and me without a job, things had fallen back into the old tag team routine, to get things done while taking care of the kids.

It wasn’t so bad when the six older kids were at school and all we had were the three babies.  They were easy enough to keep happy between the two of us; nothing like the old days when we had six all at the same time!  But once the older children came home with their differing needs like; food, homework help, loud imaginary play with friends brought home from school- all mixed with babies crying….well you forget you see, once you have been away from it for a while.  You forget just how incredibly LOUD that is!! 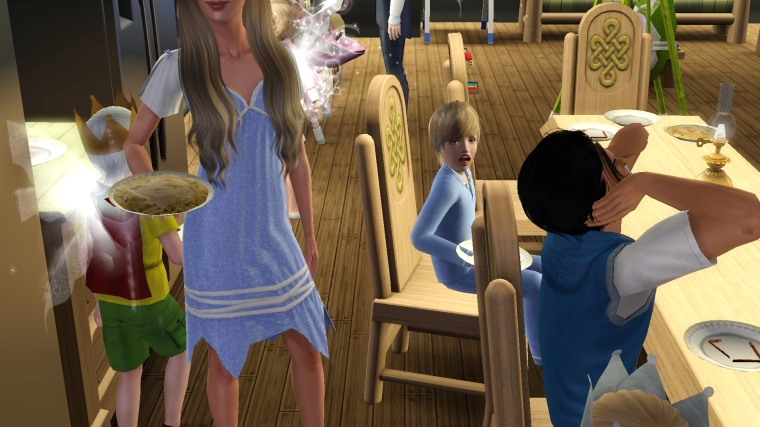 Cameron just continued on taking care of everything with a smile on her face for the most part.  I really don’t know how she did it.

I should mention that some of the kids were a big help as well with things like chores.  In particular Dain, the youngest of the first set of triplets.  I had never met a more serious child than Dain and it was written all over his face.  Just look at him here while he makes the bed for his parents. (without being asked, I might add-and no “neat” trait) 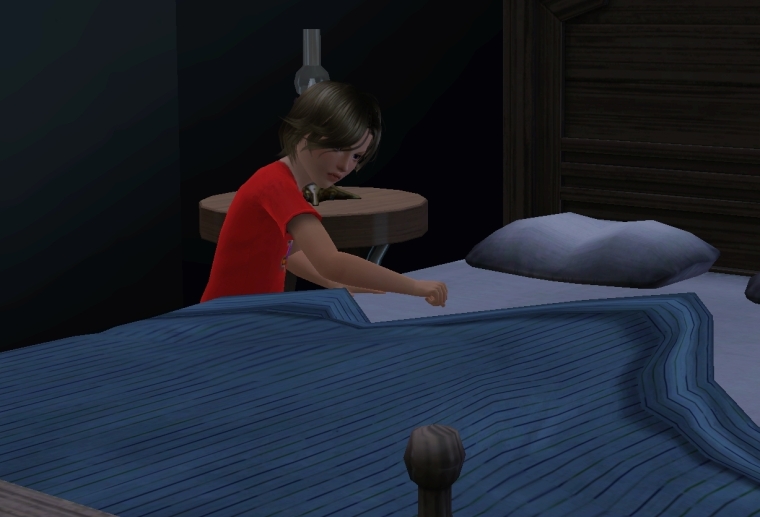 He would quietly make his way around the house, helping out with whatever he could and not really speaking to anyone while he did.  It took me a little while to figure out, but what I did understand after spending a great deal of one on one time with him was this; somehow Dain knew what had happened with his grandparents back in Monte Vista.  My guess would be, he overhead his parents talking with Honor that night before they abruptly moved to a whole new town on the other side of SimWorld.  He was also missing his friends and because he knew about MV, he was worried too.  All I could do was assure him that the bad guys had been caught and the situation was all over.  Okay, I know that is a lie but I had to tell him something.

Dain was also a perfectionist, but lacked the self confidence to be one.  He was incredibly frustrated with everything going on in his life and had someone not been paying attention, I truly believe he would have just spiraled into depression.  So I worked with him to help boost his confidence.  He wanted to learn soccer and since that was something I was good at, I was more than happy to help. 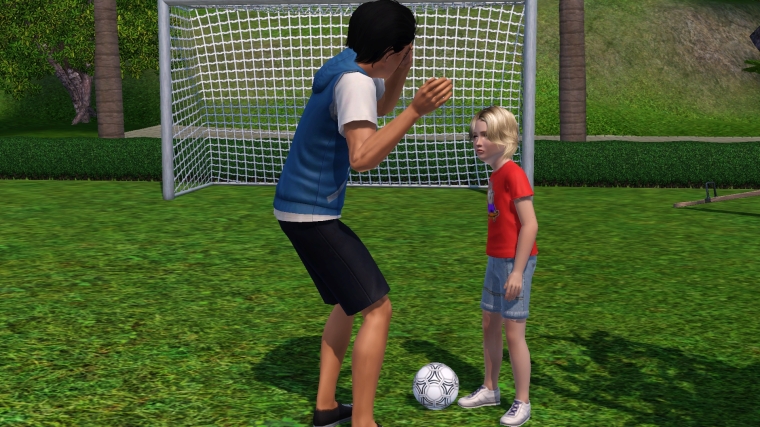 After a few afternoons, he had really mastered what I had been telling him, getting shots past me into the net.

Yet even so, I still had the sad little boy who didn’t think anything he did was good enough. 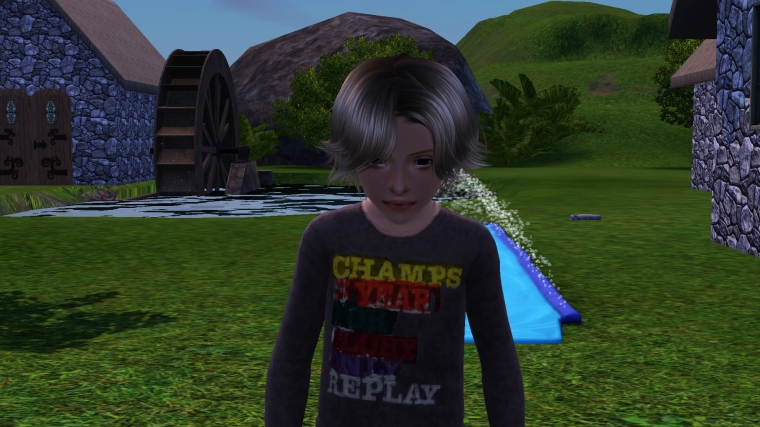 I honestly didn’t know what to do, or say.

I was concerned the other children would feel I was playing favourites, so I found things to do with them individually as well.  Kalen loved playing catch all the time. 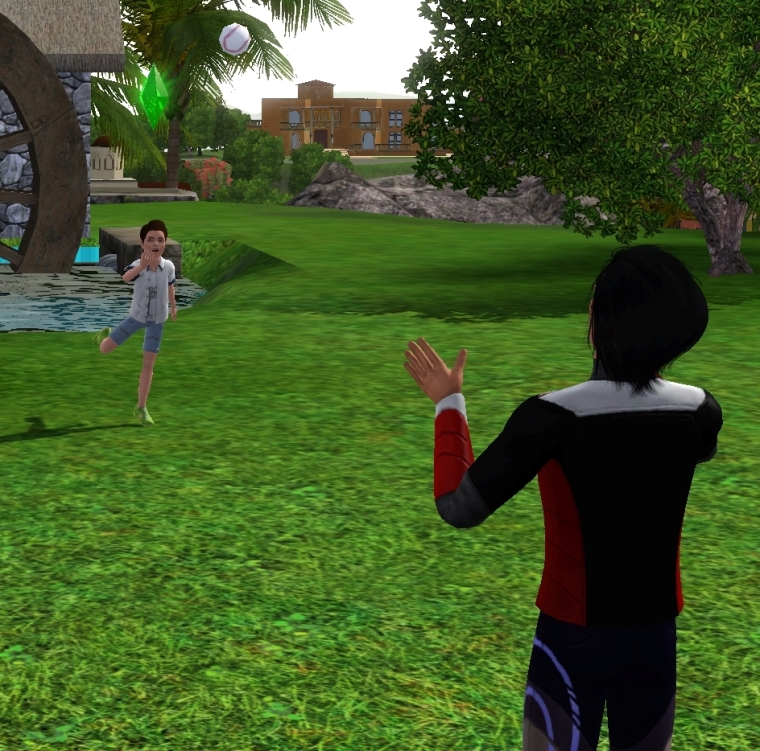 Foster was in to bugs and we were forever on a bug hunt all over town.  Fayette loved being a fairy and anything fairy like.  She had learned to do quite a few things already, including this contortionist trick that really freaked me out.  “Look uncle Jin, look what I can do!”

I seriously wondered if that kid wasn’t somehow born with soft bones the way she could bend and fold her body!

Seriously, how does she do that? Gives me the creeps, and then some!

Oren and Orla?  Always off together with their heads buried in a book.  But I did take the kids to the beach on a regular basis to teach them all how to swim. 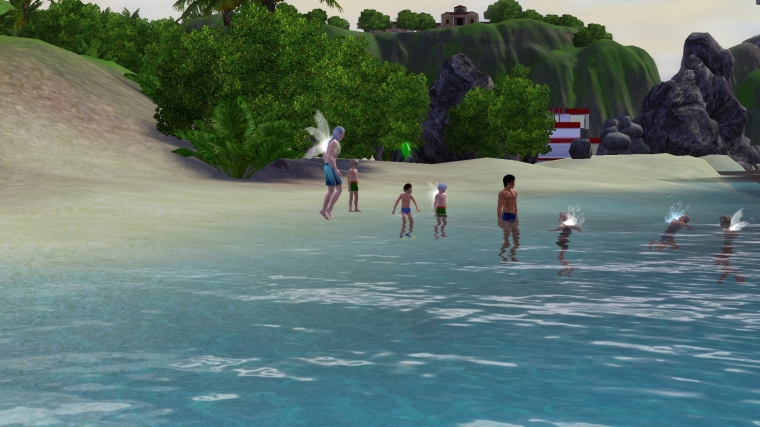 I must admit, I’m still confused about how those wings don’t get damaged in the water.

When you have kids, there are always other kids around.  Here, Caerul got asked to read a bedtime story for Orla’s friend…who wasn’t even sleeping over…I might add. 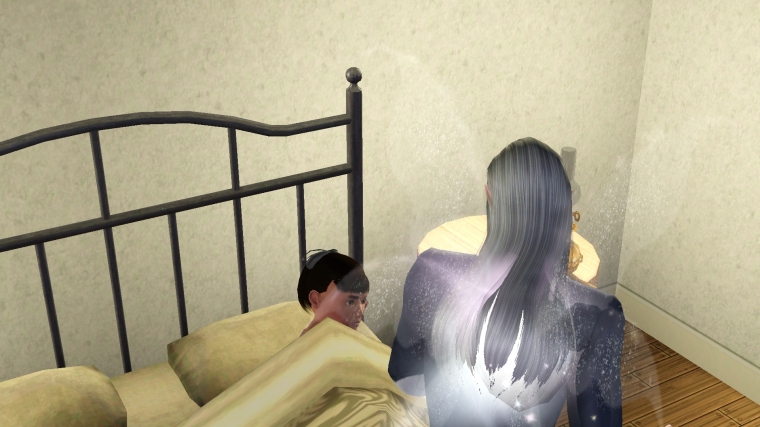 Oh and by the way, that’s MY bed!  So I  had to couch it for the night.  That gal is also our paper delivery gal.

It wasn’t long before the babies aged up and then just three days later, the first set of trips followed. 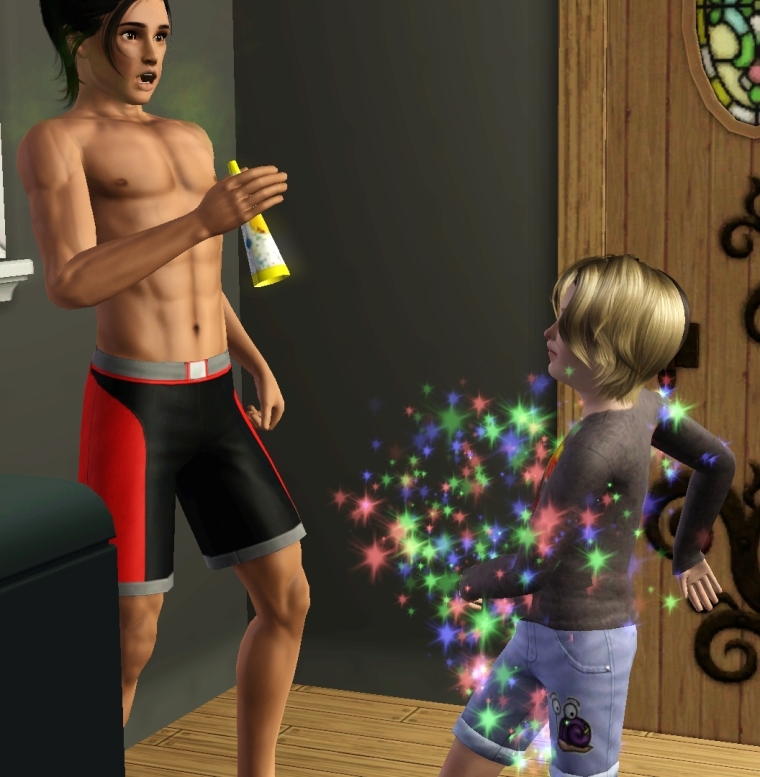 Before I knew it I found myself in teenage land where I was fielding requests to teach them how to drive and being asked for advice on dating.  Funny……wasn’t I just a teenage say…I dunno, last week approximately.  This was too weird!

Foster was the first to fall.

“But Uncle Jin,  I think she may be the one!  Taryn Ichtaca is the most perfect girl I will every meet!”  Foster pleaded with me.  “You got to help me or I am sure to screw this up.”

“Slow down.  Foster, you are barely sixteen.  Wait!” I stopped him before he could interrupt.

“Just wait.  I wasn’t saying she couldn’t be the one.  All I’m saying is you’re barely sixteen with your whole life ahead of you.  When I was your age I had no idea what life was going to throw at me and you don’t either.”

Foster sighed, “She’s the most beautiful girl I have ever seen. Don’t you think Uncle Jin?”

I raised my eyebrow at him, gave him this funny look and said “Do you really want me to answer that?”  When a look of realization came across his face I replied “No, I didn’t think so.”  Then I walked away smiling, cause I knew he couldn’t see me, but still a little more annoyed than I had been before this conversation started. Especially since he woke me up and dragged me out of bed to have the conversation, in the first place.  Hormonal teenage boys!  I was never like that.

Oren completely shocked me by coming to me next.  Oren, can’t get his nose out of a book long enough to eat a meal, all of a sudden found girls.  Our conversation went like this:

“But Uncle Jin, you don’t understand.  It’s harder for us fairies to find someone to love them because not all mates want to take on the fairy life and the differences that we are.”

“Hmmmm, I’m suddenly experiencing deja vu,” I said to him with a smirk.

“Seems to me Mr Oren, fairy that you are.  That I had this exact same conversation with YOUR father when he was about your age.  Funny enough, when I look around, I see nine, count em, nine children born to my best mate and he is still happily married to your mom, regardless of all the struggles they have been through.”

“Yeah, I guess.  But he is probably just lucky.  It will never be that easy for me.”

“No such thing as luck my friend.  What will be, will be.  I’m sure there is someone great out there just waiting for her moment to meet “the one” she is hoping for.  Be patient, it will happen, I know it will.  But in the meantime, have a little fun too.”

Later that day, Cameron, Caerul and I sat in the backyard watching the fireflies light up the back yard.  As I recollected both conversations I had with their boys to them,  they laughed so hard they had to hold each other up.  When Cameron finally got control of her giggles, she looked at me with a straight face and said, “I’m so glad the kids have you to talk to about all the stuff kids can’t say to their parents.  You are doing such a good job, Uncle Jin.  But I hate to tell you this.”

“Tell me what?”  I asked, wondering if I had said something wrong to the boys.

“Oh no, the advice was great.  No I was just thinking Jin.   If you think this is bad, take heart.  Cause there are seven more kids to go!” hahahahahahahahahaha

In closing, making the decision to follow my family to Isla Paradiso was the right thing to do and I am reminded of that everyday in every way.  Perhaps someday, when the family doesn’t need me the same way, I can begin again.  A new career or even, maybe, a wife of my own but for now I am not looking.

I’m just happy knowing in my heart that this is where I was meant to be……..

In Chapter 36, The Mystery Is…..  Jin leaves Monte Vista to join his family.  Question

becomes, which family is he talking about?  I love that many people have asked me that, worried that Sun has truly been left behind.

To answer that question, you must move on to