We’ve  had some new characters added to our story.  Just giving you a sneak peek of one.

Then there is this guy, who has gone under the knife for some major plastic surgery.  I wonder who it is……and why?

I Finally Had A Quad Birth!  I will tell you How

I chose to go back to my fairy couple in Dragon Valley to do this challenge for myself.  Lasota Fairy and Polovina Nimph.  Here is a new version of Polovina at TSR. 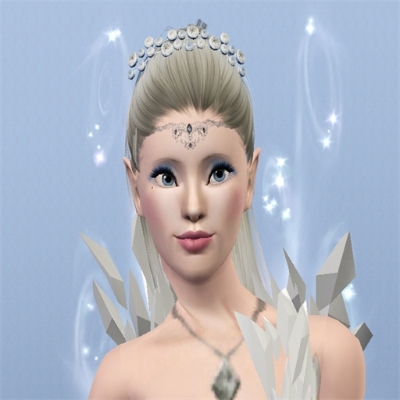 So I began this process by going into Master Controller and changing the default number of children from 3-6.  I did this just as a precaution and I have no idea if it really made any difference in the outcome.

Next I purchased the fertility treatment for both parents.  I believe it costs ten thousand LTR per sim to do so.

I started the process of getting quads after woo hoo and before the pregnancy notification the female sim gets to let her know she is pregnant.  I purchased four things. A small music player, a tv and both pregnancy books.

I tuned the music player to the children’s station and left it playing childrens music until she gave birth.  I can’t tell you how happy I was to turn that off in the end.  To play it safe, whenever I could I had Polovina dance to the music, but just for an added boost, I had Lasota do it too when he could.  I would have had the cat do it if it would have made any diffference.  I tell you I was that determined. 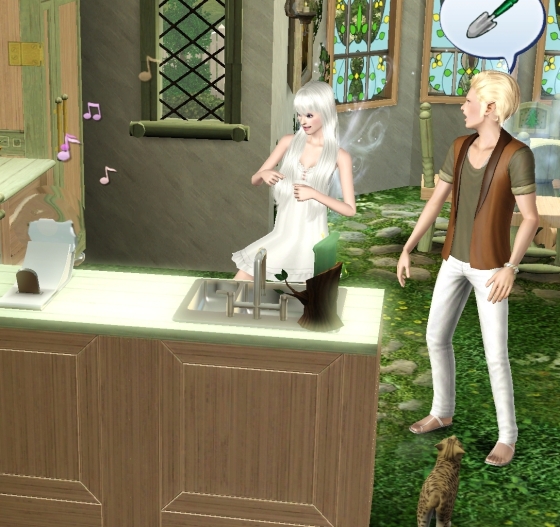 Then I had Lasota tune the tv to the children’s channel. Again, as an added boost, they both watched tv as often as I could fit it in.  Which was often considering they both didn’t have jobs!

Polovina, who had been to the book store and grocery store, gave one of the pregnancy books to Lasota.  They both read a pregnancy book and when they finished, they swapped to read the other. 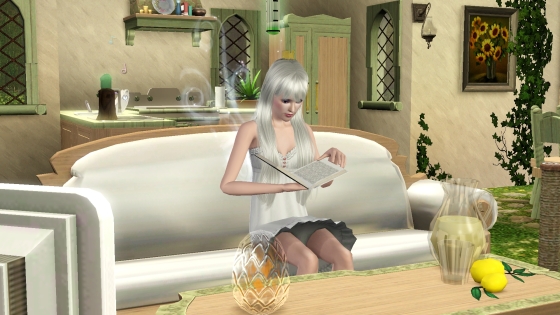 In fact, after reading the percentages for twin, triplet and quad birth in Master Controller the morning of day 3, I had them each read one book again as a precaution, just hours before she gave birth.  I really didn’t want to do this challenge again-can you tell?

Next I bought four cribs.

Now I want to say that as far as I know, this is not necessary to do before birth.  However, if you are using the  Awesome mod, then yes it it.  Decorate away the nursery.  You can definitely see that I am squashed for space here, but I was building them a fairy ranch and at the last moment, I moved them instead of trying it on this lot.  In the next pic, you can see I had already removed the cribs in anticipation of moving the family.

There is lots of controversy over whether the fruit thing is even viable anymore as a way to get the gender baby you want.  However, my sim needed to eat anyway so she had an equal serving of both apples and watermelon twice;

two apples, two watermelon for a breakfast and two more of each for an afternoon snack on day three.  I didn’t care about gender but I had her buy them and eat them anyway. 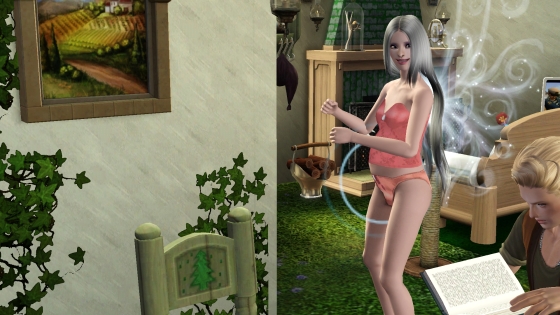 It’s birth day and here are the results: 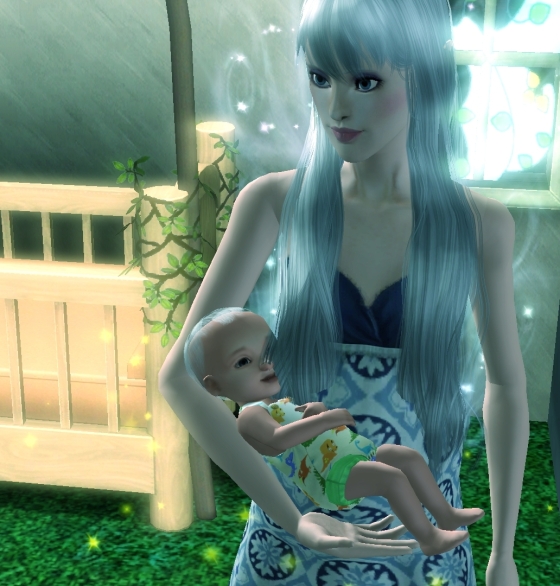 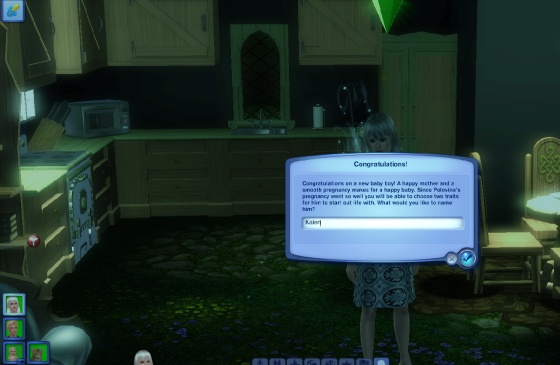 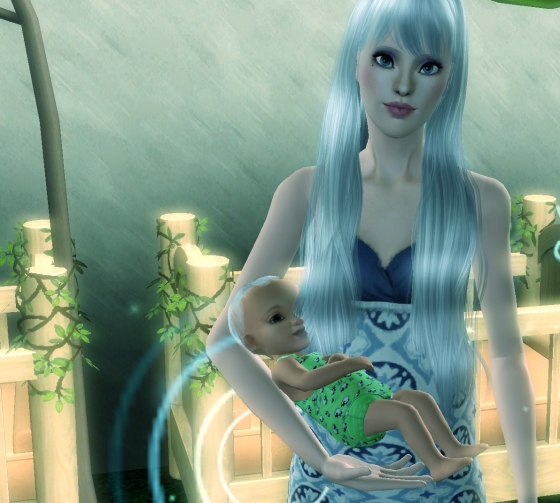 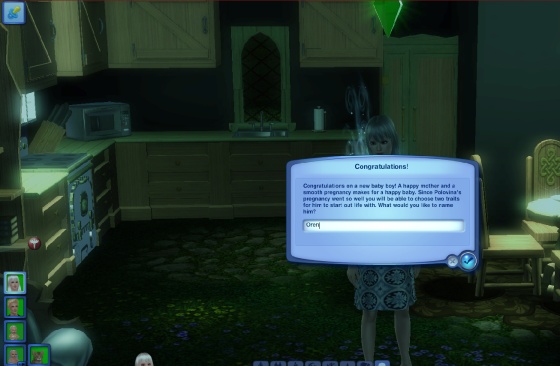 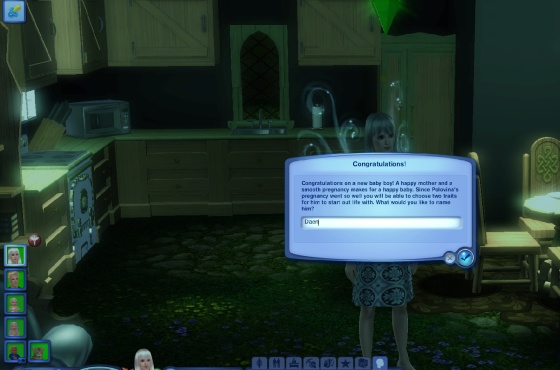 Just look at Polovina’s face there.  Yup, I think I would be feeling the same thing!  “What the blazes have I gotten myself into!”  I also think it was cool that they were born on a full moon, which I didn’t plan, but considering full moonlight and fairies go together…..

I also forgot to mention that I had to change the skin on each baby, because the skin tone on mom, was not designed to fit infants and you get the “no eye” look.  If you ever see that, it’s not corrupt just a flaw in the design of the skin.  I will not tell you which creator has a skin like that. So please don’t ask.

So there you have it.  NOW, I wonder if I could get 5?  Someone smack me because I may just get enough of an idea to even try!  I once did three sets of triplets all in a row and that was fun.  9 kids all in diapers, oh the good oh days.  I may just do this to Polovina and Lasota again too, but we shall see what I can personally handle.

If you are wondering about the house/lot where they were conceived, this is it HERE. 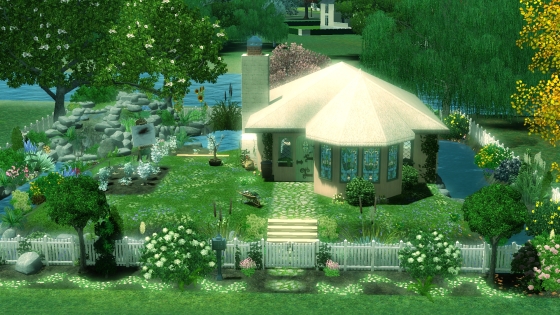 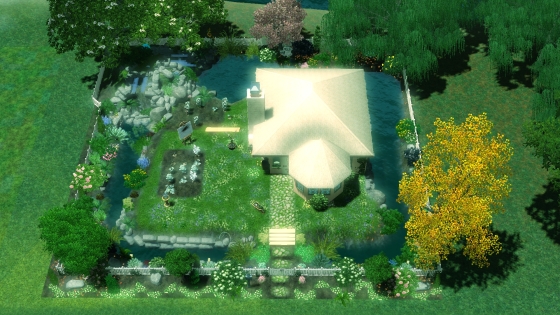 It has a double waterfall into each side of the creek.

The Fairy Ranch where they moved to, can be found  HERE  I actually can’t really show you pics because this save on my computer only has the unfinished lot and it is night of course.

Here is one though,

I really love my waterfalls! Across the road you can see their old lot.

I hope that was helpful to anyone who wishes to give it a try.  I’m not saying this is full proof, but it certainly worked for me.

Update to the Quads 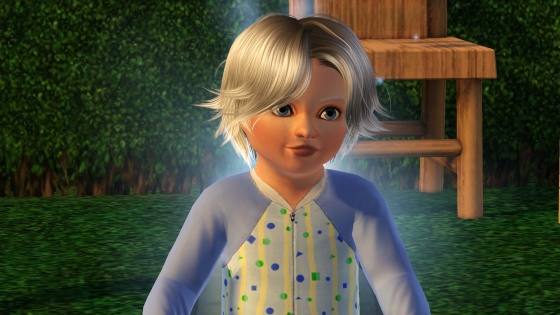 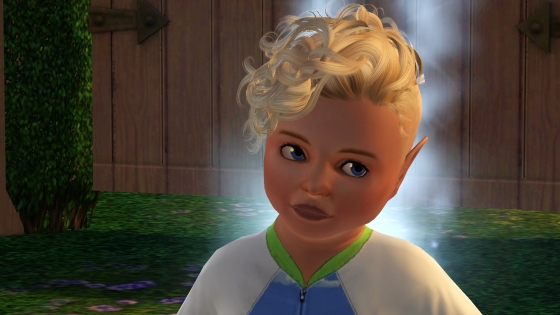 Oren Third born, has very bright blue yes almost the shape of his mothers but his fathers blond hair.

Daen fourth born, has purple eyes (my doing as they were brown which neither parent has) and are smaller than his siblings.  He has his momma’s white hair. 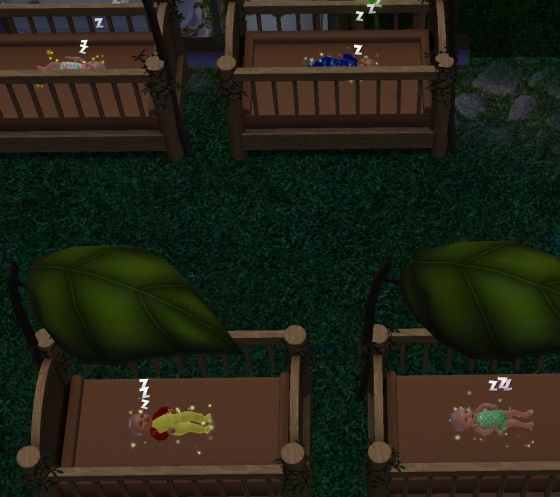 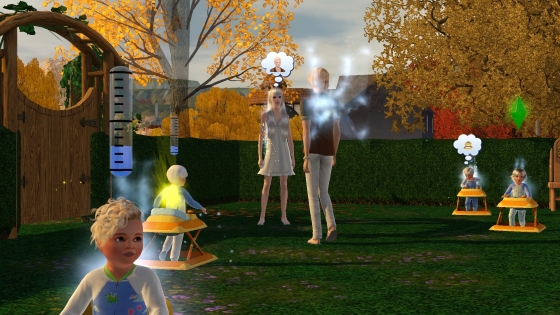 A larger version of the fairy cottage with a basement as well.  They are going to need it! 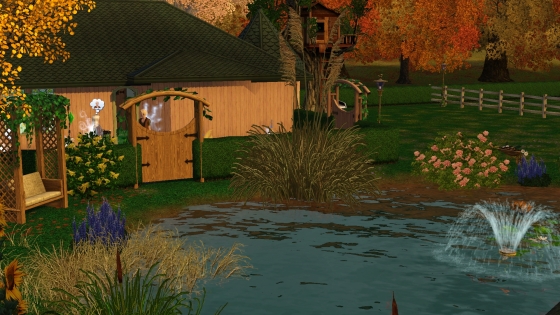 Waterfall needs work in this save.  Inside of the house in this save is still not done yet.  Too busy caring for babies and now toddlers!