Telling Jin about Socks was one of the hardest things I have had to do as a parent.

Maya and I had been up all night, cleaning up the yard and the barn to remove all signs the horses had been there.  Maya took care of all the objects and I raked all the hay into a big pile to do something with it later.  Standing there looking at it was just too tempting and I called Maya over, dipped her into a kiss

and together we snuck into the pile for a little rendezvous.

Hey, people deal with grief in all different ways don’t forget.
Anyway back to Jin.  When we told him, he just sat there, silent and staring off into space.  No ranting, no raving, nor any crying.

It worried Maya and I immensely, fearing he was in shock or that this was just another loss to add to any psychological damage he may be suffering from with all the changes in his life since he was born.  We decided to rally behind him and make him our first and foremost priority, leaving work and hobbies behind until we knew he was well again. Maya suggested a day at the beach where I would finally be able to teach him to snorkel.  Jin loved the idea and eagerly jumped into the water waiting for me to join him. After giving him the basics, I watched as he tried it first on his own

and then I joined him with his mother keeping an eye from the beach.

We didn’t find anything in the water that day, but the skill boost he got from all the practice put us one step closer to checking out the dive spots in the area.

Maya cooked us some delicious hamburgers on the grill I installed in our new outdoor kitchen down on the beach.

By the time they were done, the sun had almost completely disappeared for the day, leaving us sitting by the fire to eat our burgers, then roast some marshmallows.

The evening started to get a chill to the air if you weren’t close to the fire,

so Maya send Jin off to bed, going with him to help him get settled. She then returned to the beach, where we enjoyed some quiet moments alone.

“Did you notice that Jin wasn’t his normal chatty person today.  It was like he was here but not really here,” said Maya.

“I think it will just take time.  Time to learn to trust again.  At least he understands that there was nothing magical or sinister going on here,” replied Ian.

“Do you think we made the right decision to lie to him about who came for the horses?  What if the aliens come back? Come back someday when you and I are both gone?”

“Then hopefully he will handle it.  I’ve never before met an alien either.”

“Yes but at least you knew about them somewhat.  Jin isn’t in the real world.  He’s sheltered here.  Perhaps he needs to spend some time in the real world, when he is older, so he is prepared.”

“This isn’t something I want to talk about right now.  I’m cold, come here.”

Maya and I moved further down the beach and into the warm water.

After a while, Maya said “He isn’t you Ian.  You have to remember that.  He may not choose to live here on the island and you need to be prepared for that.”

I would never be prepared for that, nor did I want to think about it at that moment. So I did what I had been wanting to do all day;  I leaned over and kissed my wife.  Which led to more kissing and Maya pulling me into the all in one bathroom.  I will never get enough of this woman, until the day I die! 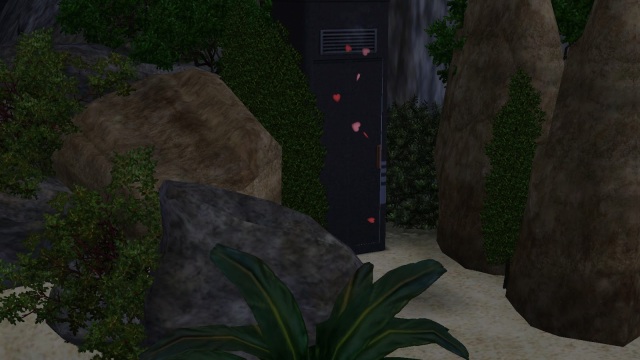 Jin woke up early the next morning and came down to have his breakfast while it was still dark.  It seemed as if he went through the motions without really being there.  When he was done eating his bread and jam, he just sat at the table staring off into space.

I felt so bad and didn’t know what to do for him.  He left and headed off toward the beach.  A little while later I went in search of him only to find him sitting in the sand box, staring at the barn.

Then it came to me, what I could do.  So I made some quick calls and went on the internet to find what I was a looking for.  If I was lucky, it would arrive the next day.  For now, all we had to do was keep him busy till then.

Later on that day, Jin was busy doing his two hour afternoon dance training, so I thought to catch up on some reading I had put off for the past few weeks.  I sat down on my favourite spot by the bay window and…..

(reader may insert whoopee cushion noise of their choice here) 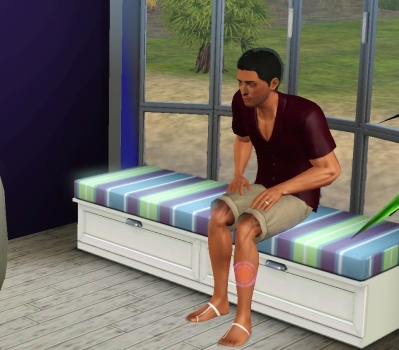 My immediate reaction was to get instantly annoyed and want to yell for Jin, however then I realized that I couldn’t get mad at Jin. Not now, it was just not the time.  So instead, I chuckled and wondered how long it had actually been lying there waiting for me to sit on it.

The next few days, Jin seemed to become more and more like himself.  He spent a lot of time playing with Sophie, which is something he hadn’t been doing before.

Sophie went everywhere with him, including the washroom where she patiently sat and waited for Jin to finish in the shower everyday.  The only time they were apart was at night, as Sophie had decided she really liked sleeping in the cat’s bed. 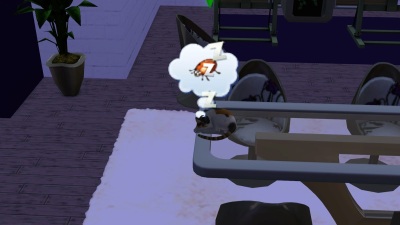 Aria was not impressed with this change, and spent most of the night up roaming the house searching for different places to sleep.

Then sleeping most of the afternoon to catch up on lost good nights sleep.

During the time that Jin was giving Socks all his attention, Sophie has started acting out in her own little ways.  Her destructive ways had begun to get worse and she seemed to digress in toilet training, peeing all over the house.  Maya and I had tried to fill in for Jin by giving her lots of attention but it was clear Jin was who she wanted.

Now he had the task of re training Sophie to stop peeing in the house.  It was a task that was not going well.  Sophie had at least one accident everyday, and usually right when Jin was standing there with her. 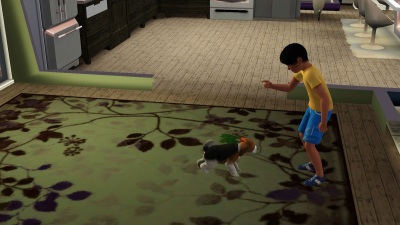 It was like she was telling Jin, I’m still sore with you.  Jin took up the task of training her, asking for no help from us and we left him to it, hoping the new bond he made with Sophie would help heal his sore heart.

Maya and I briefly discussed getting Jin a horse or his own, but decided against it.  The island was really not a suitable piece of land for a full grown horse to live on, and together we agreed it was not a good lesson to teach him.   All loss was hard and could not be replaced with a replica.  We let the matter drop, feeling confident we had made the right decision.

It took more days than I had anticipated but my gift for Jin finally arrived.  I took him up into the barn to show him what I had gotten.

Jin walked in the barn and just stood stock still.  I was half way up the ladder when I turned to see him staring where the horse pens had used to sit.  I called to him and he followed me up the ladder. 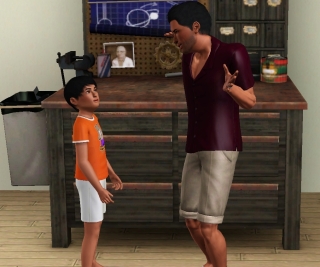 “Tada!” I said to him for dramatics.

“It’s an inventing bench.  My father game me one when I was about your age, and now I am giving one to you!”

“For me?” Jin asked, surprised.

“Oh course for you, however I may want to use it every once and a while for the fun of it.  But I have one condition.  You have to manage how much time you spend up here.  Sophie can’t get up the ladder and it’s not fair to her to ignore her.”

“Sure go ahead.  I will take Sophie back to the house with me for a while.  Have fun!  But remember to be safe.” 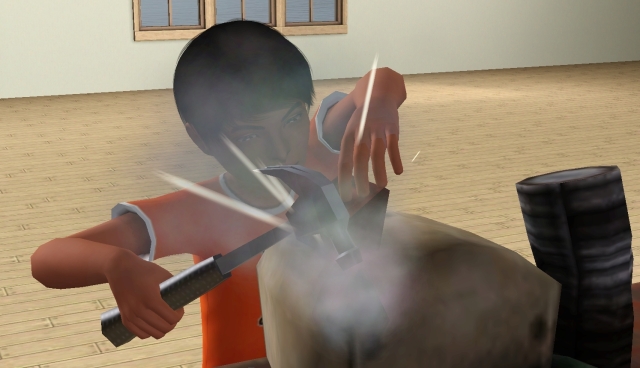 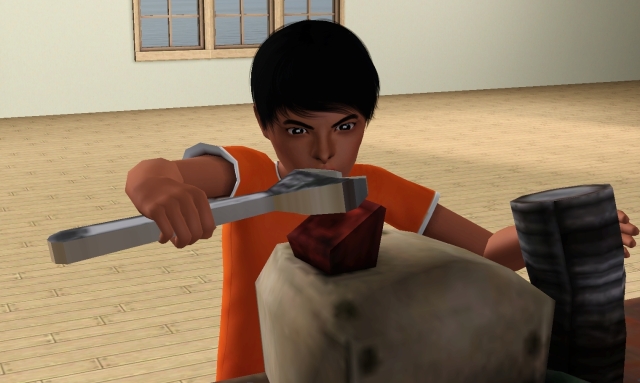 Jin spent the next few hours up in the barn banging away on the metal and when he was done, he had created this. 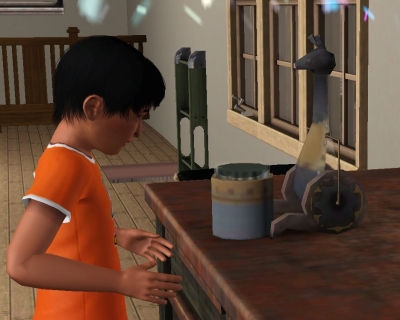 I’m not exactly sure what it is; some duck coin bank maybe?  It was his first creation and he was very proud of it, so we celebrated with him and told him it looked great.

Since the night we lost Socks, we were really starting to see our old Jin back again.  After making his creation, he spent the night joking and laughing with us. He challenged me to a game of racing and beat me mercilessly! 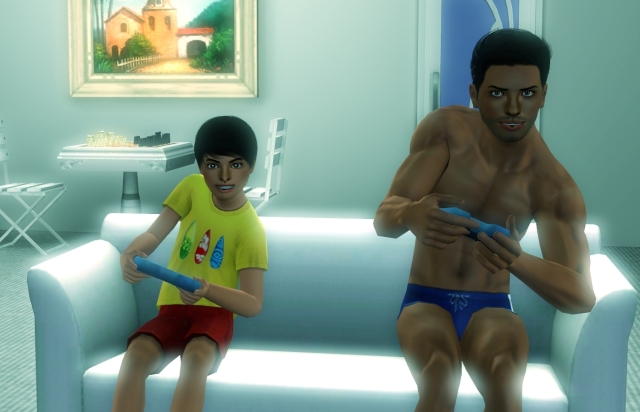 I really felt that things were going to be fine.  That night his mother read him a bedtime story, which he missed as he fell asleep as soon as she opened the book.  Yes we had definitely struggled through the worst of it and come out on the other side.

From now on things were going to be good.
Then………….Sophie went missing…….

Contemporary Carpet 12  by PralineSims  (In Foyer)