** To the readers and my friends.  Most of the pictures for the chapter were sadly lost.  I did my best to recreate what I could. Enjoy!

The rhythmic sound of tires on the pavement lulled Maya into a quiet half state of half awareness, as thoughts flew by in her mind. She had been driving for half an hour before she realized she had no memory of the drive beyond leaving the university.  Her mind was filled with memories both real and imagined, as she envisioned how the next few days would go.  She wanted to feel completely excited about her future, but doubt and fear kept creeping into her mind.  It was risky, this plan she had devised, but it was the only way.  She just hoped that it worked, her entire future as she desired, depended upon it.

Some time later she checked into a resort and happily climbed into bed.  Rest was what she needed, for tomorrow was going to be a busy day.

The next morning, the sounds of song birds invaded her dreams and she slowly rose from the depths of sleep, to a bright and sunny room.  It was later then she had hoped to get up, so she raced through a quick breakfast, but still lounged in the bath.  The last thing she needed was to be stressed, for today was going to be stressful enough.  She took time to do her make up and hair, then dressed before heading on her way.

Driving down the hill towards the water, Maya could see the beautifully decorated beach.  Butterflies danced in her stomach in both nervousness and excitement for what she was about to do.  Yet even though she felt this way, she knew she had made the right decision for her life.  Now to begin.

He was waiting for her at the gate.

Taking her hands, he said “I’m going to do this right.” Getting down on bended knee he said “Maya, will you marry me?”

Maya was so overwhelmed with emotion that all she could do was nod.  Ian kissed her hand and together they walked down the aisle to the wedding arch. 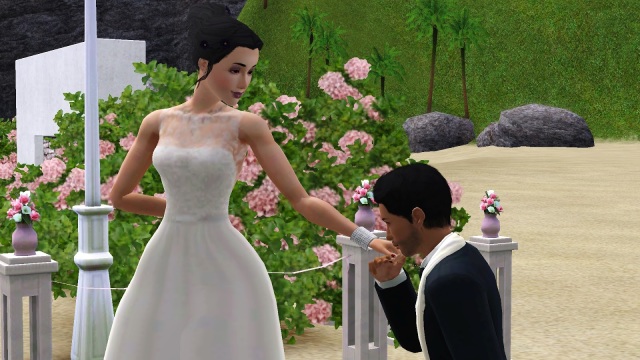 Looking out at the guests, she saw Paris and Margaret, both with smiles on their faces.  Margaret gave a little wave, as acknowledgement to Maya’s surprise to see them both there.  Next to them, stood Nancy Landgraab and her son Malcolm.

Standing up for Ian, was Geoffrey Landgraab and Luke Hemmings. Turning to her right, and standing up for her, she saw three Meir sisters, dressed in beautiful light purple dressed and matching jewelry.  She was so glad to see them, her eyes began to tear.

“None of that!” said Brenda Lee.  “Or I will give you something to cry about!”

Maria started walking Jin down the aisle, but when he saw his mother, he broke free from Maria’s hand and raced towards her. Lunging at her, he wrapped his arms around her legs, saying “Mommy.  Mommy!”

Dressed in his little suit he looked so grown up for his age.  Maya placed her hand on his head and he raised his eyes to meet hers.  Maya began to laugh, so over joyed she was in everything she saw.

Ian took her hands and turned her to face him.

It wasn’t a church full of people, but it didn’t matter.  Standing there on the beach, with only their closest friends, was the perfect way to start their new life together.  Hands in his, Ian confessed his love to Maya, slipped a ring onto her finger.  Through moist eyelashes, Maya gazed at Ian, and began to tell him how lucky she was to have found him and that she would love him forever.  She sealed that promise by slipping a ring on his finger.  They leaned in to share a kiss, but Jin, who had been standing quietly between his parents, began demanding their attention and was picked up by his father.  Ian and Maya placed that kiss on the cheeks of Jin, adding him to their declaration for a long and happy family.

They quickly posed for pictures, cut the cake and shared a meal together. 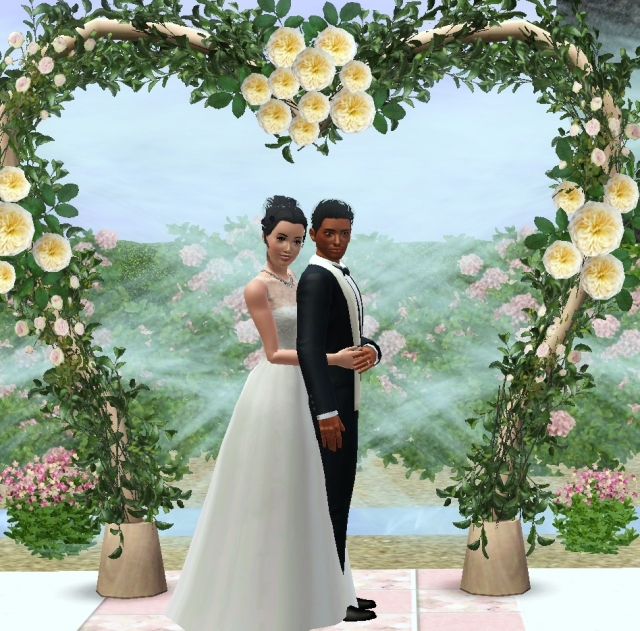 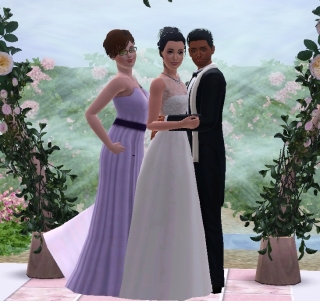 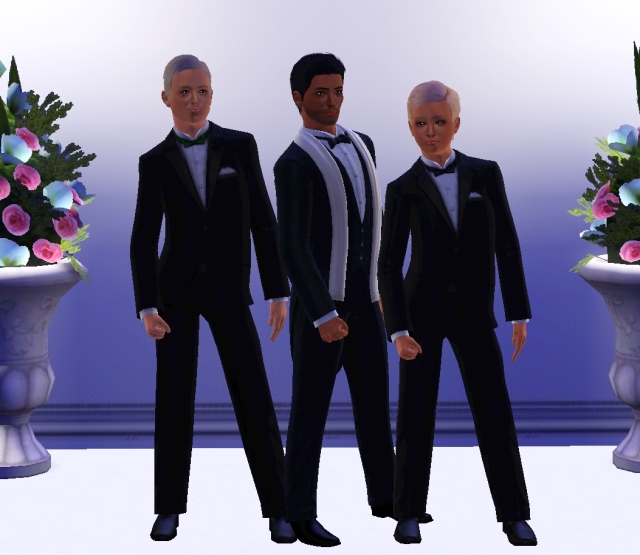 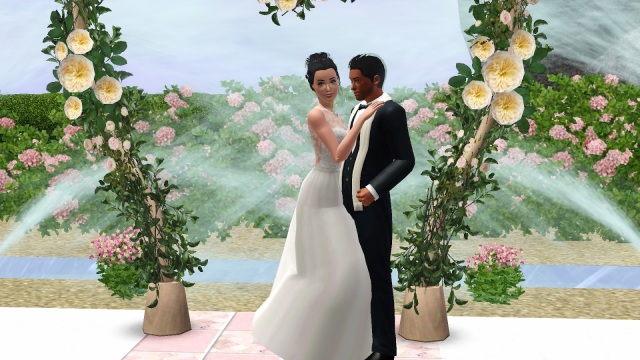 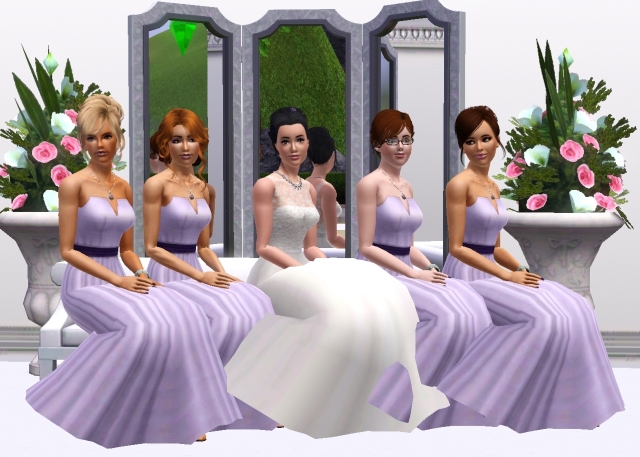 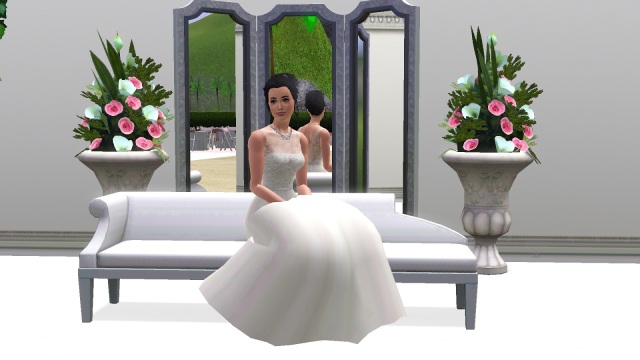 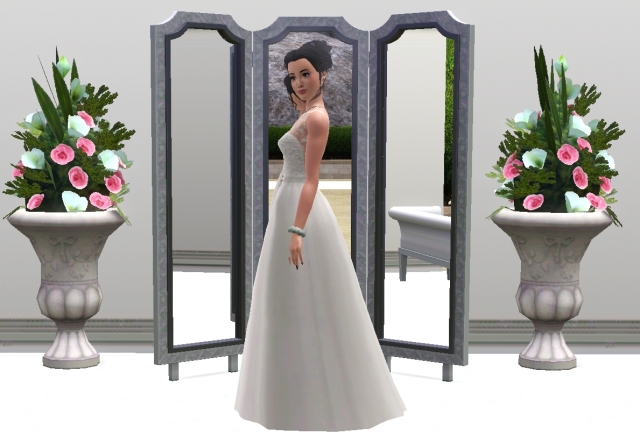 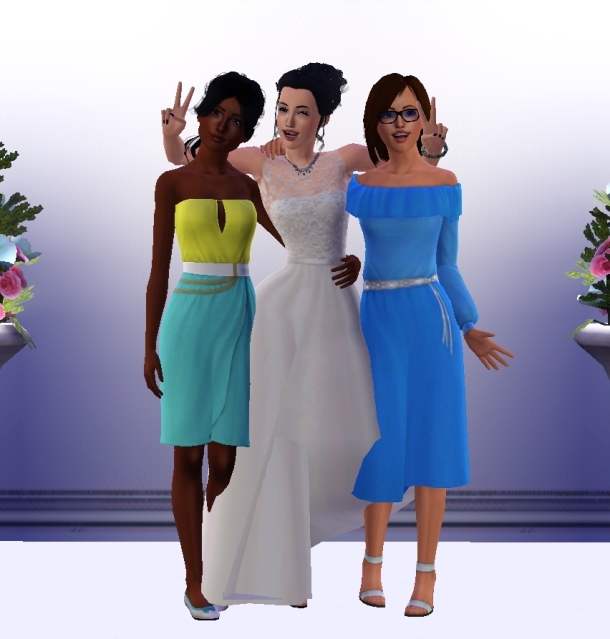 When the music began, Ian led Maya to the dance floor, for their first dance as husband and wife….again. 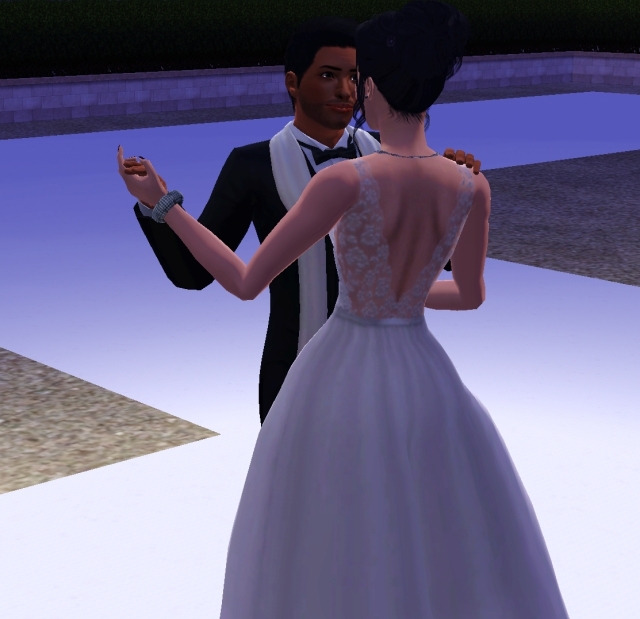 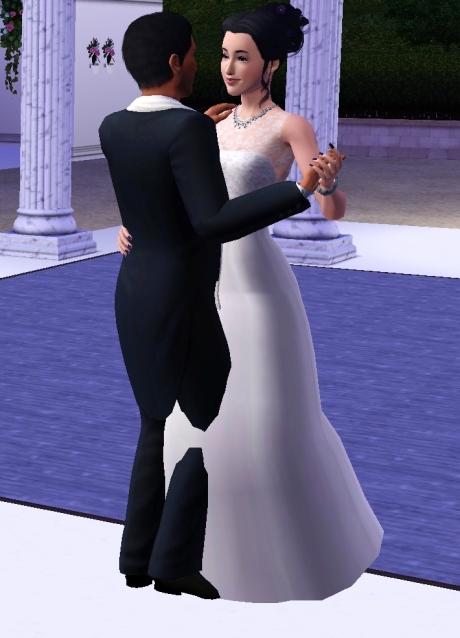 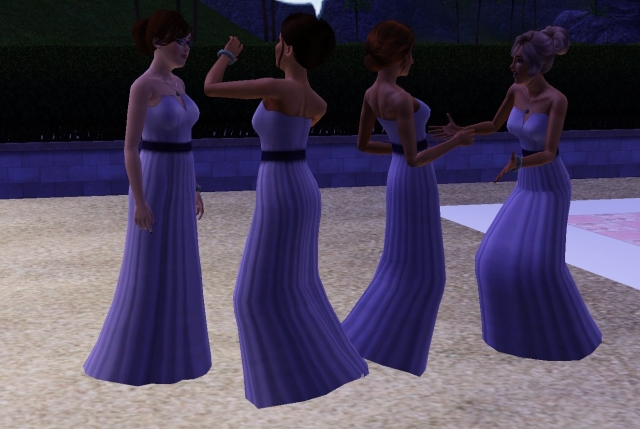 They were all having the best of time at the party, when Maya remembered the time.

“Ian.  Can you take a walk with me? I have something I need to show you.”

Holding out her hand, she waited till Ian scooped up Jin into his arms, then take her hand.  Together they walked down the beach and onto the dock, where Maya turned to Ian.

Ian placed Jin down onto the dock with his doll, and turned to give Maya his attention.

“I want you to know that leaving you and Jin to go to university was a mistake.  I know that now.  But at the same time, it was a good thing.  In some ways if I had stayed, I would have remained that obedient wife who only thought of her family and gave no thought to what I wanted or needed.  It was what I was raised to do. It was how I was raised to be.”

“Being away from you and Jin, has taught me just how important family is to me, but I know now that I would never have been happy only being that meek loving wife for the rest of my life.  My art is very important to me.  It always has been.”

“I know that Maya.  I never would have stopped you from pursuing that or anything else for that matter,” said Ian. 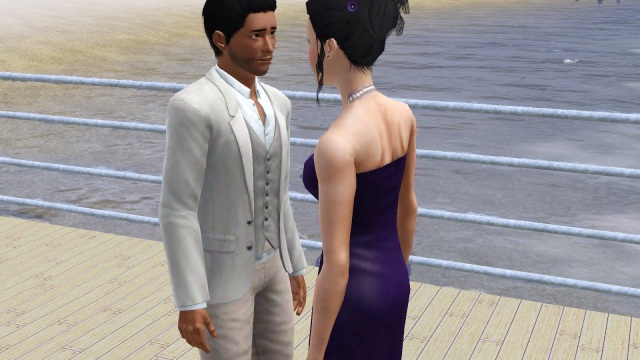 “Yes I know that too.  But I would have stopped myself.  Do you understand?”

“I received this amazing opportunity.  It was presented to me on the same day you proposed.  Megan Lightell, who is a famous landscape artist, offered me a one year apprenticeship studying under her in Paris as her assistant.  It’s one of those once in a lifetime opportunities.”

She paused to give Ian time to absorb this information.  “I’m so happy to be your wife again and I am very much looking forward to a life together with you.  But I really really want to do this.  I’ve been going crazy trying to work this out in my mind. I’ve spent this whole time trying to decide between marrying you and coming home, to leaving for Paris for a year.  Then it occurred to me, that it didn’t need to be a choice between one or another.”

“I know how much you love the island.  So here is what I propose.  I talked Megan into eight months instead of a full year.  If we leave now, we would have the summer together, then I could start my apprenticeship in the fall. What do you think?”

“So you are asking me to spend eight months away from you?  For Jin to go another eight months without his mother?”  replied Ian.

“No.  See that is the best part.  Look!”  Maya pointed off into the distance.  Ian turned to look in the direction she was pointing. 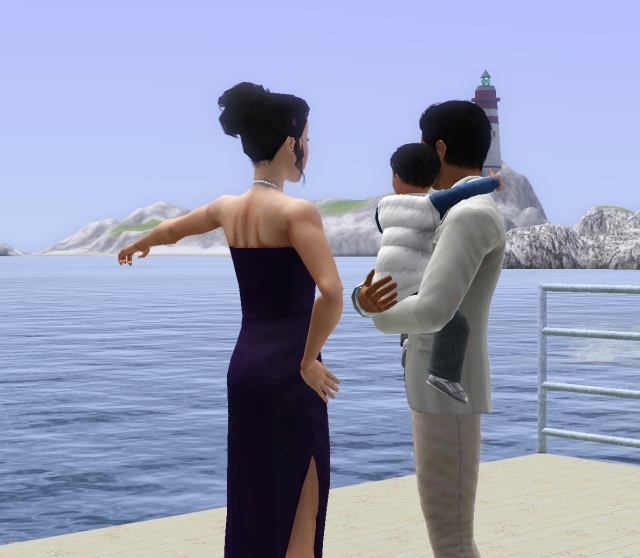 “I bought us a boat.  A new home!  We can spend the summer sailing and make our way to Paris.  We will live on the boat during the apprentice ship, Megan agreed to that, then in May we can take our time sailing home.  By the time we returned to the island, we would still have time to get ready for winter to set in.” 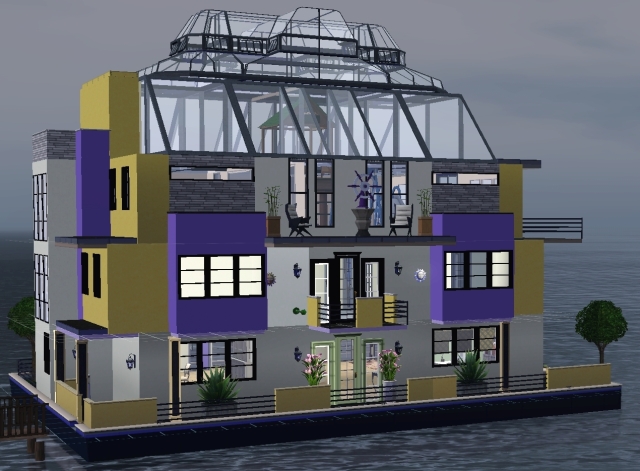 Ian’s eyes had grown wide at the site of the very large boat off in a distance.  He liked what he saw.  He stayed quiet while he considered the offer.  Eight months really wasn’t anything in the big scale of things.  All that mattered was that they were together and that Jin had his mother.

“Really?”  Maya was so excited that she jumped into his arms. 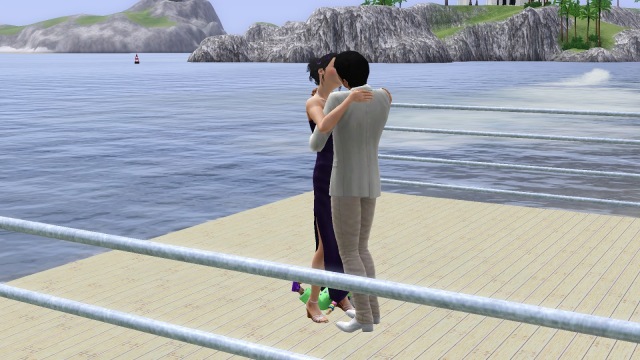 They shared the kiss they should have experienced under the wedding arch as a newly married couple. 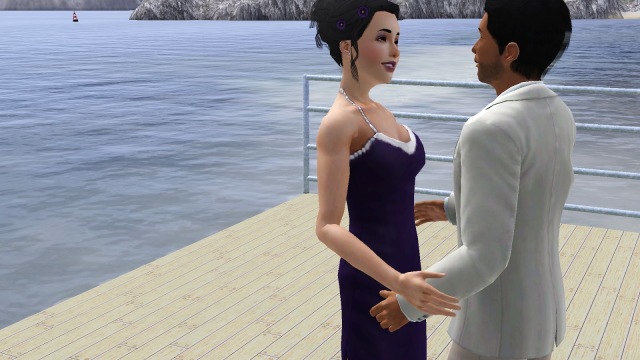 “It’s starting to get dark.  Perhaps we should say our goodbyes and see our new home?”  she asked him.

Back at the beach, they said their goodbyes, and made their way by boat to their new home.  Ian charted the route into the open sea while Maya got Jin ready to bed. 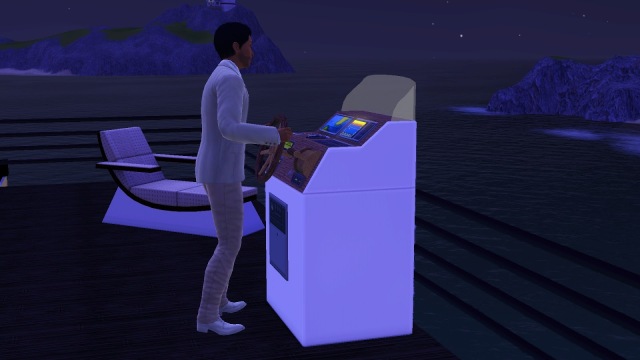 Once everything was settled, they came together in their new master bedroom. 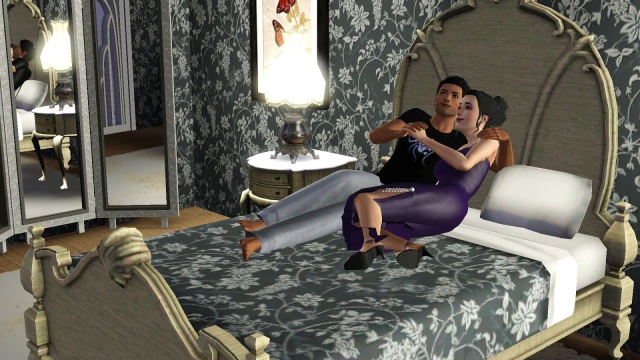 “Well Mrs Bell.  Shall we begin our new life together?” 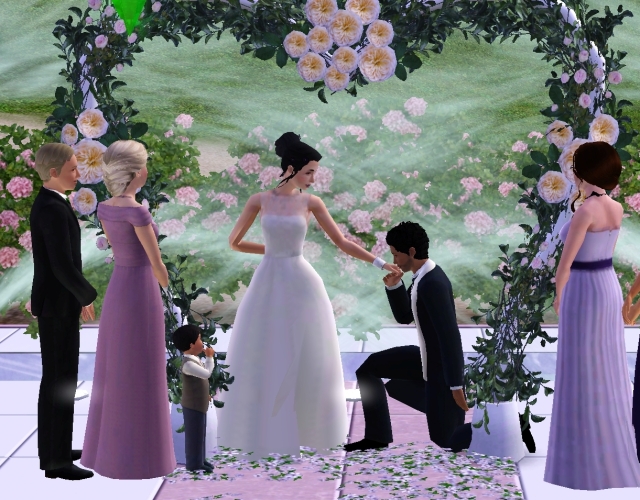 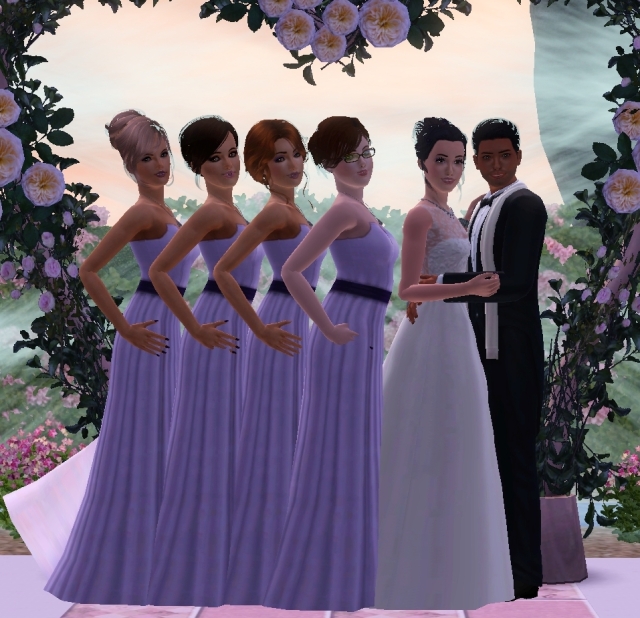 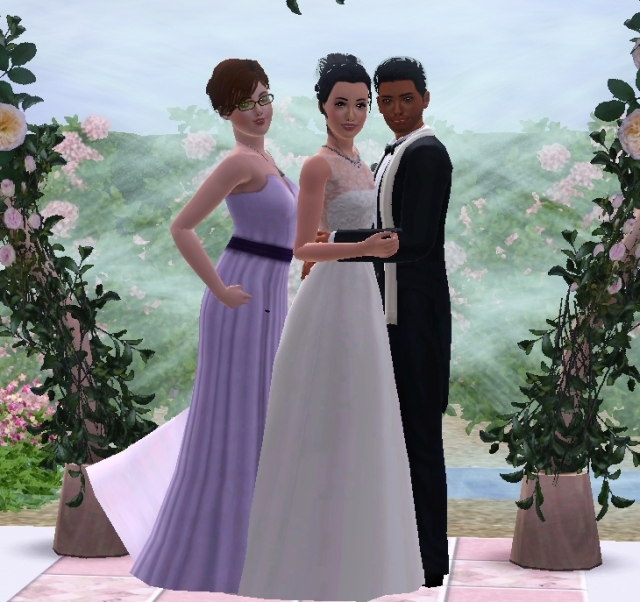 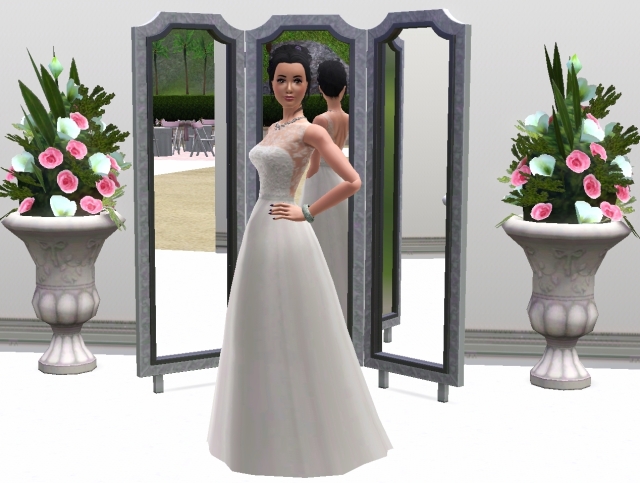 **Due to a mix up in transferring blog posts from Blogger to WordPress, the first chapter of Generation Two didn’t publish.  There fore you will want to click the link here to carry on. Gen 2 Chapter 1 Jin’s 5th Birthday

The New Houseboat Created by BMIT04  To be uploaded at a later date when story is over.

Maya’s Hair is an EA hair

Poses Used In This Creation