Maya’s destination was the Sorority House in University Town, where she had enrolled in the fine arts program at the university for first year students.  Her hope was that the university program would introduce her to rich students and ultimately to the film and music scene.  She believed that rich students as friends would set her on the path to the lifestyle she was hoping to live.  She couldn’t wait to wear tight expensive clothing and have “relations” with handsome hot guys. 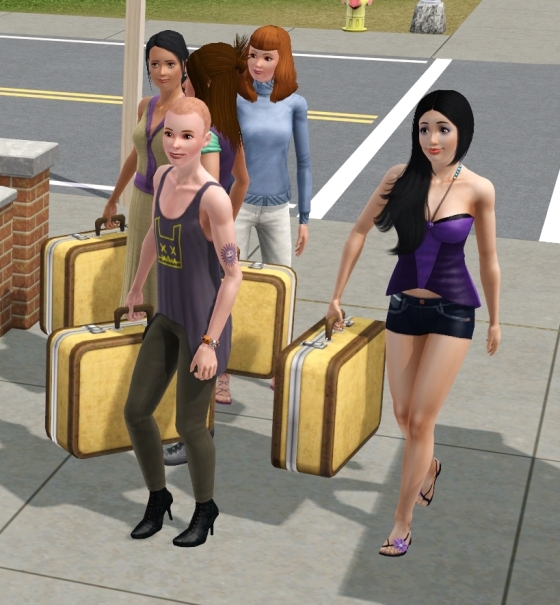 After the meet and greet at the student union, Maya decided to take a walk and get to know the town a bit more.  She popped into every store and met the local merchants, scoping out places for dates and just generally learning what was available.  While she was checking out the local grocer, she picked up a few pieces of fruit and a lottery ticket for the following nights draw.

It was her first gambling experience, as gambling was not allowed in China; not at least for women. Thinking nothing more of it, she shoved it into her bag and carried on with her day.

The first night at the sorority house, one of her dorm mates threw a formal party as a get to know you event.    The party was packed with all her dorm mates, professors and some people from around the town.  It was there that Maya met Chloe. 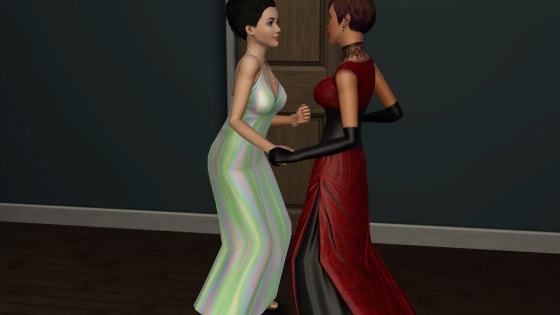 Maya had been dancing all night long and drinking juice from the many kegs stationed around the house. She was feeling quite the buzz right down to the tips of her toes.  Never having had juice before, Maya didn’t realize that she had gotten quite tipsy. When she started dancing with Chloe, the dancing turned quite provocative and Chloe started making moves on Maya. 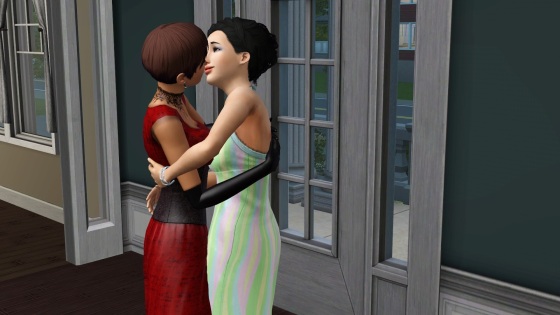 Maya was really too intoxicated to realize what she was doing and before she knew it, the seductive flirting had ended up in Maya’s dorm room and into Maya’s bed. 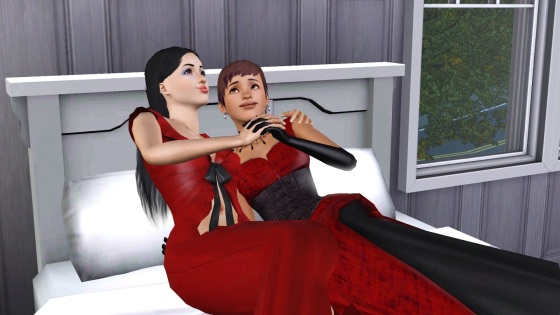 Maya had never considered the possibility of woo hoo with a woman and she wasn’t quite sure if the disappointing experience had anything to do with the juice or her gender preference.

But in the light of day, when the juice haze had faded, Maya and her room mate were a little more than embarrassed. After laughing about it a little, they decided to just remain friends, citing what had happened between them was just one of those “college things”.

Maya’s first class began at noon that day.  She made some new acquaintances with the people in her program and was invited to a party at the Fraternity House just down the street from her dorm for that very evening.  She just couldn’t believe her luck.  Her first college party!!  She just couldn’t wait!  Time to go shopping for a hot new outfit!    She chose a white full length form fitting dress with blue and silver sequins that shimmered in the light when she moved.  It was a bit above her price range and her budget, but she just didn’t care, because it would be well worth it.

The party started at eight thirty that evening and by the time she got there, everyone was well into the juice kegs and having a good time. She scanned the room and started planning her attack.  She saw a few male professors including an older professor who was greying on top and was carrying quite the pudge up front. He followed her around talking her ear off incessantly and she had been pleasant at first, but after that she was just finding a way to get him to go away.  He was probably quite the looker at one time but certainly nothing like her handsome husband.  Whoa-where did that thought come from? Maya spent the night dancing but kept away from the juice kegs.  She didn’t want another incident like the night before with her dorm mate.  Maya was just about to leave when in walked Eddy Mullins and his entourage.   Maya froze.  Her heart began to pound and her breathing quickened just looking at him.  She watched as he scanned the room, stopping when he saw her.  Like two magnets, they moved towards one another.

“I know,” she replied.  Eddy was the local and famous rock and roll singer from the band Aces.  He had made quite the name for himself and his music was loved by all, including Maya.  It didn’t get any more famous, than Eddy Mullins.  She just couldn’t believe her luck.

“I’m Maya,” she corrected herself, feeling a little more than embarrassed.

“Nice to meet you” Eddy said to her.  “Would you like to dance?”  Not wanting to say anything else embarrassing, Maya just nodded her head yes.  It was like magic.  Everything in the room just disappeared until it was just the two of them.

She knew there were paparazzi all around, but she just didn’t care.  Looking into this man’s eyes was mesmerizing and she didn’t want the night to end.  So when the party began to break up, Maya invited him back to her dorm room.  They woo hooed all night long.

When Maya awoke the next morning, her heart jumped when she saw that Eddy was still in the bed with her.  Quietly, she left the bedroom to have a shower and brush her teeth.  On her way back, she ran into one of her dorm mates and couldn’t resist the urge to share what had happened.  Her mate was so excited that they shared a high five.

Maya placed her hand to her chest and one to her forehead and mimicked as if she were melting.

“He has the best stamina!  I swear he could go all night long!”  Maya whispered to her laughing and giggling.  “Come, I don’t want to wake him up.  He had a hard night!”  Which brought both girls to giggling hysterically.

Maya went downstairs to make herself some breakfast and read the paper.  She was thankful that her class for that day didn’t start til four.  It was already noon as it was.  She walked into the kitchen to find her dorm mates sitting around the kitchen table grinning at her.

“Have a good night?” one of them asked her, and they all began to laugh.  “Ummm,” was all Maya could say in return. She was handed the newspaper and then she knew why they were all acting so strange.  Front page of the paper, was a very large picture of Maya and Eddy!

She smiled to herself and sat down to eat her cereal.  Coming across the lottery section, she suddenly remembered she had a ticket in her bag.  She brought it out to check it and couldn’t believe what she was seeing.  Maya won!  She won!  Not a small amount either.  Maya was now a millionaire!  She screamed and began dancing around the kitchen.  “I won!  I WON!”  From this point on, life was going to be exactly what she wanted.

Everything was going to be just grand!

Maya became an instant celebrity virtually overnight. Not only had she made the paper  after spending the night with Eddy, but then they did a story on her for winning the lottery. Her Sorority House was surrounded by paparazzi who followed her everywhere and her phone kept ringing off the hook. People came from everywhere begging to be her friend.  She was stopped constantly all day long by people asking for autographs and inquiring where she bought her fabulous clothes.  Needless to say it was more than a little overwhelming, and most definitely intimidating.  Offers and opportunities started just falling in her lap.  Too many to ever accept and she couldn’t pick up a newspaper or celebrity magazine without finding a picture of herself, or with Eddy.  One thing she had certainly learned from all this, was that celebrity life was a little more complicated than she had originally thought.

The one bright to all this was Eddy.  The day after the news hit the paper, he arrived at her dorm with a large bouquet of flowers in his arms and an invitation to dinner.  They had been together every day since.  He was such a wonderful person and very patient with her while she learned to deal with the fans and paparazzi.  They spent nearly all their time together in and out of the bedroom.  Actually more out of the bedroom than in.  Eddy was constantly surrounded by his entourage of people and she found it very hard to spend any special quiet time alone, without someone wanting his attention or walking in on them.  She wished she could just spend more time with him alone!  Even if that just meant seeing a movie or eating at a restaurant.

Balancing school with all the offers she didn’t want to turn down, plus homework and spending time with Eddy was a real challenge, yet she took it head on.  It helped that Eddy was enrolled in a few of her art classes with her.  He came to her photo shoots and studied in her room while she painted.  Truth be told, she was starting to prefer being in her room with him and the door locked.  It was the one place she knew she could just be herself and not worry about paparazzi snapping photos.  At least that is what she thought until this happened….. 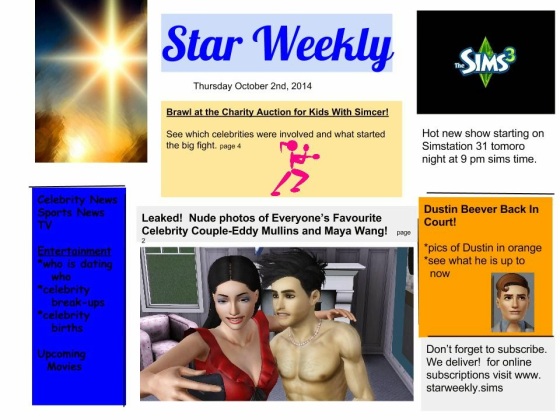 Maya was absolutely mortified!  They were play acting in a sense.  Maya had an art assignment to do and Eddy being Eddy had easily volunteered.  It was a nude sketch she needed to turn in for her sketching class at school, They both thought it was great fun, until Maya went to the store the next day and found this on the magazine stand.  Eddy came over from his last class of the day and found her sitting on her bed with her head in her hands.

Without even saying a word, Maya just handed him the open magazine, eyes glued to the floor.  After looking at it Eddy began to laugh hysterically.  Maya’s head snapped up.

“This isn’t funny Eddy.  You’re naked!  I’m nearly naked!  It’s a real invasion of privacy!  I can’t believe this has happened.  I still don’t know how they even got those shots.  It’s not like we have any buildings around us and we are on the second floor!  We ARE in the middle of the country for Pete sakes!”

Eddy walked to the window, holding up the magazine in front of him, and pointed to a tree way off in the field behind the Sorority House.

“My guess would be there” he said pointing to the tree.  “Long range lens I would think.”

May jumped up and after a brief glance outside, grabbed a blanket off her bed and started tacking it up across the window.

Eddy reached for her hands.  “Relax ok.  We weren’t doing anything wrong.  In fact, if I remember correctly,” he said wrapping his arms around her, “we did a lot of things right that night.  Really right,” he said in that low flirty voice of his.  “Maybe you need some reminding.”

He led her to the bed and proceeded to remind her just how RIGHT he was.

Later on while they were still lying on floor, Eddy decided to bring up the topic of the photos to try and ease her discomfort. 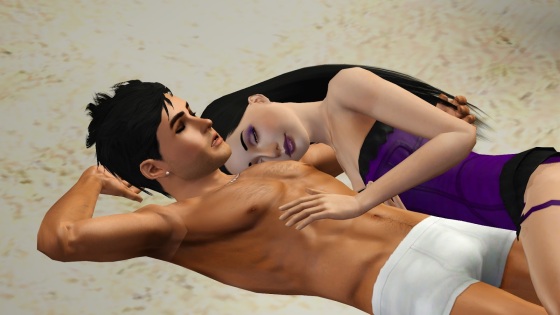 “This will be good for you.  You’ll see,” he said while rubbing her back.  “This will open doors for you.  Everyone is going to want a piece of you now.”

“That’s great,” she said to him.  But deep down she wasn’t sure if good, was a “good’ way to describe this situation at all.