If Ian thought he was miserable before with the rain and the trespassers then this was the topping on the cake.  The week following the robbery was undoubtedly the most miserable he had suffered in his life!  Not only was he robbed of his sense of safety and security, but the bright shiny view of his paradise had been tarnished.  Who would think to come all the way out here in the middle of no where to rob him?  It’s not like he lived on a big fancy boat and had lots of things to steal!

Then to steal a toilet? 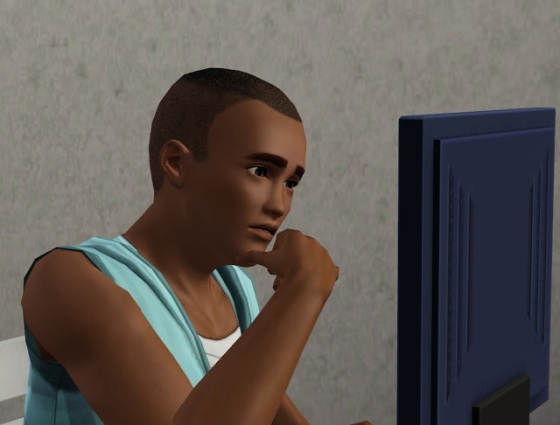 His parents had taught him that when life gives you lemons, you make lemonade.  So he decided that he was going to make the most of his time to make up the money lost in the robbery.  He fished all hours of the day, painted pictures till his hands cramped and furiously typed away at the computer putting out not one book, but two!

He managed to work eighteen hour days by taking two hour naps to help him get through, which greatly cut down his full night sleep to four hours. He thought he was being more efficient in using up most of his time to the best of his ability.  But no matter how exhausted he was when he went to sleep, his dreams were filled with images of the robbery. 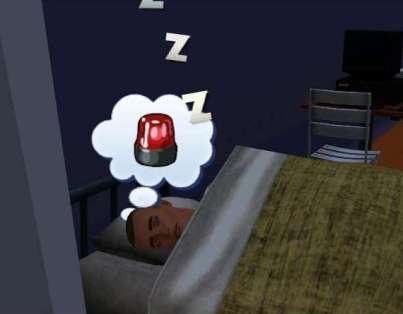 Ian considered getting an alarm system for his tiny floating home, but realized it would do him no good without the police to respond.

On the third day, it was like he had salt rubbed into his wound. This absolutely gorgeous blond woman arrived on the dock, to mourn at the tombstone.  He felt an instant attraction to her and wished he could meet her!  Just because he wished to live alone, didn’t mean he didn’t feel the pull of a man’s needs and the desire to satisfy those needs.  It definitely had nothing to do with him being lonely, nothing at all.  She visited for two days straight, forcing him to stay inside and focus on the tasks of painting and writing.  He was determined to stick to his plan to remain alone. Focus on all his creative talents and he continued to remind himself of that every time a stray thought about the woman popped into his head.

On the last day of the week, Ian was exhausted from all his efforts and decided that he had earned himself some fun.  The deer and the raccoon had already disappeared for the day and the longing for some company hit him like a blast of cold air.  Standing on the edge of the island dreaming of days past, he heard a funny little sound and realized a bird was drowning  in the water. 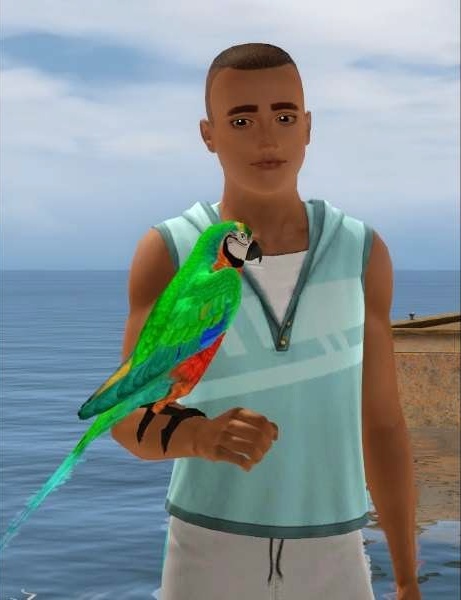 Scooping it up as quickly as he could, he examined the bird to check for injuries. None found, Ian began to gently speak to the bird in a quiet voice to try and calm it from its fright.  When the bird determined that Ian meant it no harm, it began to nuzzle Ian’s neck with soft noises that Ian took to be gratitude for saving it’s life.

The parrot was a beautiful macaw with a bright red breast, a striking green on it’s back and blue on the underside of it’s wings.  Ian decided to call him Peter.  The two of them stood together on the edge of the island interacting with one another, until Peter had fully recovered from his terrible shock.  With a loud squawk, Peter flew away into the afternoon sky and Ian was hopeful that someday he would return.  Ian spent the afternoon swimming and snorkeling all around the island finding many gems and a few toys under the water.  He was tempted to do some nude bathing, but decided against it as he never knew when another band of people would arrive on the island to party. 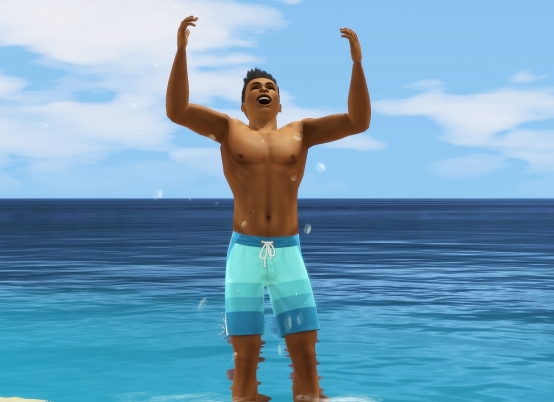 So he spent some time splashing and jumping in rhythm to the waves as they rolled in.

Back in the water swimming with the fish, he swam towards the boat and noticed something shiny under the dock.  With closer inspection he found a wind surfer up under the stairs.  Ian looked around, but saw no one in sight.  So either someone stashed up there out of sight, or it had got caught up under the stairs with the current.  He looked around again.  Hey it was on his land after all….. should he?

You bet I should, he thought and he pulled it a little further away from the stairs out into the open water. 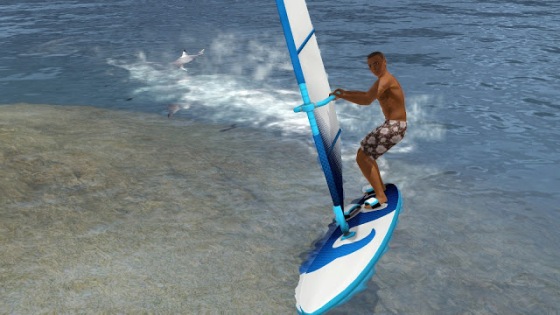 Riding the board was the best rush he had in quite some time.  For such little wind, that board could really move!  He was having the best time and after the week he had, he really felt he deserved it. 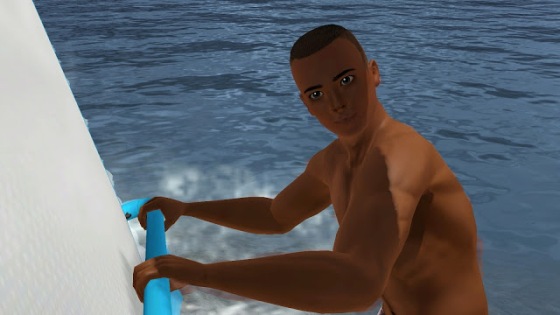 He rode that board so far out, this his boat looked like a small dot on the horizon and it 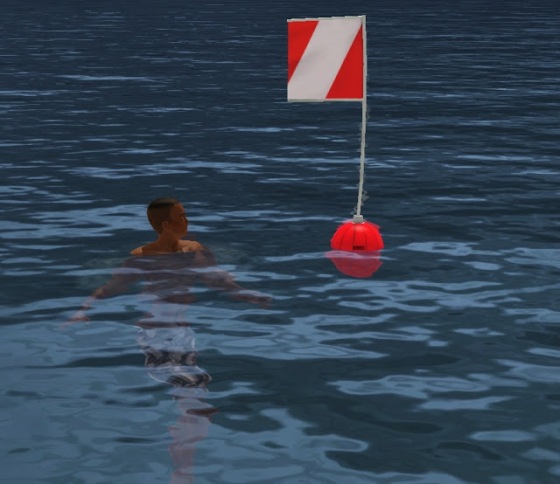 It was then he discovered the scuba diving spot.  Well that was way to too tempting not to check out for sure!

Down below, the sun didn’t permeate the surface as far as it normally would in a much brighter area of Simworld, so everything was a grey-green colour that got darker the further down he went. 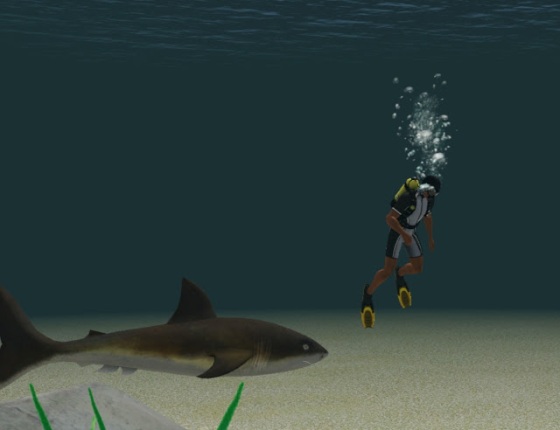 Holy Crap!  If he thought the sharks around the island were big, this must be the giant version!  He hung back waiting to see what it was going to do, but the shark continued to swim on by barely noticing him at all. 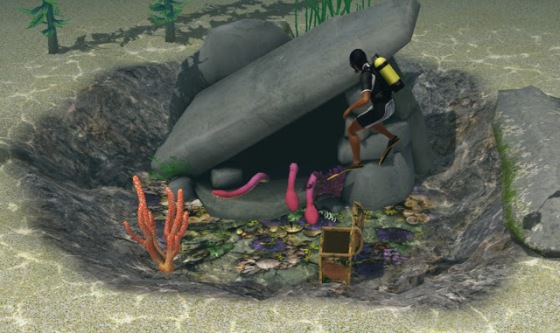 When he reached the floor of the ocean, sitting pretty as you please was a treasure chest ripe for the taking.

Ian looked around but didn’t see any boat, so where did it come from?  Did that mean he had to worry about pirates as well?  But a treasure chest couldn’t be left without opening!  So after taking one last look around, he opened the chest and found over three thousand simoleons!!  Ian was so excited at the prospect of having all that money, he began to formulate in his imagination a list of all his wants and needs.  Finding nothing else and not wanting to go anywhere near the cave, Ian headed back to the surface to return to his boat. This had been the best day since he arrived and he hoped that only meant things were looking up from now on.  He wondered if there were more dive spots out there, but he wasn’t worried for he had plenty of time to find out, and now plenty of money too!

Or so he thought!

Did you know that one can be so mad that they actually see the colour red?  That blinding raw feeling of emotion that completely takes you over, and the need for pure violence just emanates from every pore in your body……………

Ian had finally reached his boiling point.  In the two weeks following the treasure chest find, he had been robbed five more times, losing two more toilets, a kitchen light, his art easel, his microwave and a sink.  Total despair took him over and the loneliness was admittedly and finally getting to him.  How was he supposed to get ahead when life kept beating him down?  He had just been thinking about taking a trip so he could buy some much needed supplies.  Supplies themselves that were going to cost him a pretty simoleon indeed.  He thought he was one work day away from booking his trip, when he was robbed once more.  Sleep became fitful, and all he could think about was everything he had lost. He knew he had to take action, so he tried to come up with a plan to foil the robber. His first plan was to put away anything valuable into his back pack before he went to bed. This helped to keep the items he needed for work safe, but not those toilets and sinks. Who in his right mind would steal toilets and sinks?  His second plan was to block the bottom of the stairs by two walls, creating a room with a locked door.  But the robbers just walked through the locked door as if it was never locked.  That night he lost his art easel.  He had decided to leave it out, for he felt sure his plan was fool proof.

Look in the mirror, see Ian the fool.

His final plan was to remove all the doors to his boat at night while he slept. But could you believe it-the robber walked right through the basement walls. Under the boat and in the water, right into his basement, like magic. That was the last straw. 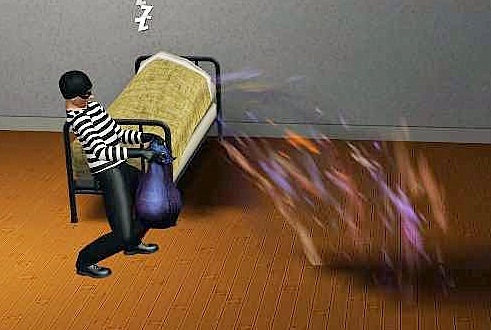 When he got up to stop the robber, he disappeared, like he had been transported to another location. Ian wondered if he was going mad from the solitude, to start believing in things like transporting. Perhaps he had watched too much Star Trek as a child. But even still, his shower was now gone, so he couldn’t have imagined it.

To make matters worse, everything starting breaking. First it was his brand new toilet, and then the sink. Never having fixed a sink or toilet before, it took some time but he tackled the repair nicely, saving him from having to spend even more money on brand new items-again. 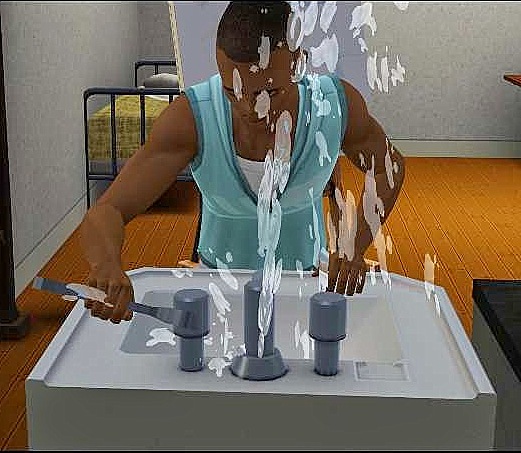 One morning while standing on the island contemplating his lot in life, Ian turned around and saw an injured falcon on the ground. He befriended the falcon quickly and it was at that very moment the extent of his loneliness completely washed over him. He held the bird to him tightly, and let the anguish flow from him. The bird stood still as Ian cried out his sorrows and when he was done, the bird squawked at him and flew away. 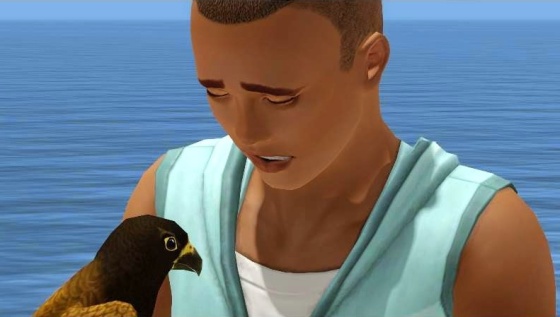 Ian was a little embarrassed for crying like a child, but he did feel a little better.  He wasn’t a quitter and so it was time to once again make some real changes in his life.  He started to wonder if living in the basement of the boat was having an impact on his emotional state.  So he decided to take what little money he had and build up so he would be living in bright and open rooms like a normal person would do.

Secondly, he knew he needed to do something about the loneliness factor. It was clearly evident he was not the type of person who thrived living alone without some form of company.  In his life, he had gone from one extreme to another.  From living on the farm with his parents, to living in the big city surrounded by people constantly, to living in total isolation.  Grief was driving his decisions and it was time he made better choices.

Phase two of the plan, was to start the sculpting part of his creative career and he quickly found he had the skill for it; producing sculpture after sculpture in clay wood and ice. His bank account grew and he was finally able to build the first floor of his boathouse and put in a kitchen. Even if that meant he had to live on peanut butter and jelly sandwiches for a while, he didn’t care. 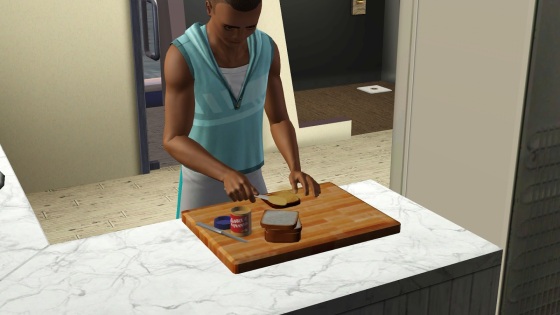 He was finally once again making headway into his new life. But he lived in dread of the next time he would be robbed.

His dreams were filled with images of robbers and alarms and police officers that would never come to his aid. But in the end his hope was… 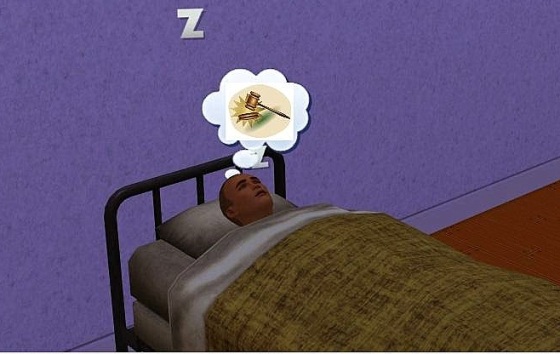 ….the robber would be caught and he would finally see some justice!