On the second day of his new life, and after his first good night sleep in a long time, Ian woke up in an excellent mood.  He couldn’t wait to get started on making the island his home and setting out new routines for his life.  He felt liberated and energized as he stood on the deck, squinting against the morning sun reflecting off the bright blue clear water.   The weather was just so beautiful, and the water looked so inviting, that he decided to put off any work and do some exploring in the water around the island. He wanted to see if he could discover why the island above water was so small.  Had the island sunk perhaps?  The water was teeming with many different kinds of fish that he had never seen before, including some small to very large sharks!  Which he discovered when he walked right into one in chest high water. 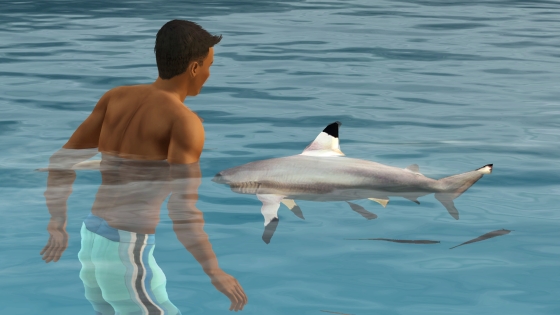 Not wanting to take any chances, he slowly walked back up on to the island to try the other side, only to walk right into another shark.  Standing on tip toes on the dock, Ian could see that his island was surrounded on all three sides!  So now I’m a prisoner on my tiny lump of dirt!  Could things get any wor…..no, stop.  Think positive, remember!

Peering over the back side of the barge, he didn’t think he could see any sharks, so taking a risk, he dove  smoothly into the water. 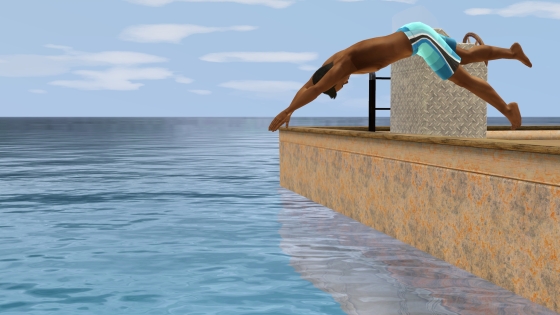 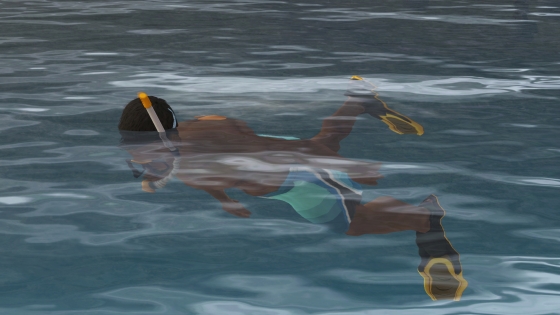 Swimming was an excellent start to the day, but definitely was not a substitute for a proper shower! His goal for today was to make enough money to buy a shower and a bookshelf, if he could make it work. Bring on the fiction novels he thought, and he wished he had some foresight or the room to bring some with him. But it was a long trip here on a small boat, and he had to travel as lightly as possible. Books just hadn’t been a priority on the big scale of things.

Determined to make the day successful, he brought out his fishing pole and once again stared out at the blue canvas of rolling waves before him, as he let his thoughts wander.  It was quiet times like this, he retreated into the comfort of memories past, thinking about his parents and all the wonderful times they had together.  However, the fish were biting like crazy, interrupting his happy solitude each time he felt a tug on the line.  Unfortunately, the only fish he caught were jellyfish and anchovies which brought little in price compared to the more exotic or larger fish around the island.  He had fished most of the day before he finally decided to give it up, placing the fish he had caught in the shipping box, and head below to cool off from the very hot summer sun. The total from his day of fishing was only thirty eight simoleons, and was definitely not going to get him a bookshelf, let alone a new shower.  His frustration was great and he struggled not to lose hope so soon after arriving on the island.

It will just take some time, he thought to himself. Establish a routine and learn how things work. Fishing out here in the ocean, was certainly different from fishing with his dad at the beach fishing area. There, the water was very well stocked with trout and tuna. Which made fishing as easy as casting in a line and virtually pulling it right back out again, with a fish dangling on the end. Fishing with his father was one of his favourite times of the month. They would rise early while it was still dark, head out and without saying a word, cast their lines into the water. By the time the sun began to rise in the sky, their cooler was more than well stocked with fish for the month. On the walk back, he and his father would have some of the best conversations where his father taught him about life, love and family. They would discuss his father’s younger years, problems at the farm and family history. It was then, that Ian would tell his father all about things in his life. Problems at school, friends and girl friends. They talked about women, his responsibilities as a man, and expectations for life. Through those conversations, he learned how much his father loved his mother. Ian felt his father was, without a doubt, the wisest man he would ever know.

Hot and sweating profusely, Ian grabbed the daily newspaper, sat down and stared at the pages without reading a word. 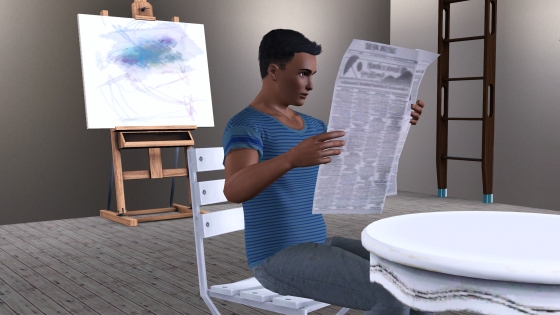 Frustrated with his predicament and looking around the room, he made the only decision he could. He sold his desk and chair to purchase the public shower station for four hundred dollars. It left him with only one dollar in his bank account and he felt incredibly nauseous at the thought. 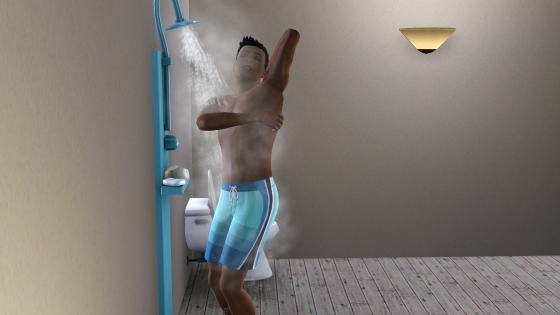 After taking a shower, he actually read the paper and made himself some canned soup for supper. Not the most filling meal but it would have to do until things got better, which things would without a doubt. They just  had to.

With nothing left to do for the day and feeling more than a little discouraged, he climbed into bed and drifted off to a sleep of hopes and dreams.

Ian woke on the morning of day three to a near pitch dark room.  The only light that could be seen was an overcast sky through the hole in the ceiling for the ladder to the upper deck.  Yet he felt absolutely terrific after a full night of uninterrupted sleep.  He rolled over to stretch his whole body, then stacked his hands behind his head to think about what he was going to do for the day, and then it hit him.  Thoughts of his very pathetic “piggy bank” balance made him groan.  He couldn’t believe that after everything that had happened to him in the past year, all he had to show for it was one simoleon to his name. He took a big breath and went in search of a bowl of cereal to calm his nauseous tummy, then headed up to the deck to catch some fish.

After several hours of fishing with very little result, he sat down on the deck allowing his feet to dangle over the edge and his toes to dip in the water.  Thoughts drifting this way and that, (he is on a boat after all), a light bulb went off over his head. Pulling out his backpack, he reached in to find his SE camera. This has surely got to get me a pretty penny, he thought. So he sold it on the spot without another thought. Six hundred and seventy simoleons later and Ian was a very happy fellow, especially since it meant he wasn’t going to have to spend another day fishing in the heat.

Putting away his fishing pole for the day, Ian spied a few deer and one lone raccoon resting on the island. He had no idea where they came from everyday, but as soon as the sun rose from the water, there they would always be.  Carefully and cautiously, he approached the animals, in hopes that he could pet one. The deer had different ideas, but didn’t hurry away, taking the time to sniff him, before shaking their head in what could only be the gesture of rejection.  Ian didn’t care but laughed.  He knew that someday it would happen and they would eventually be the best of friends.

Ian laid under the birch tree and watched the grey light through the leaves of the  tree as they blew in the wind.  Memories  came flooding back to him causing his heart to ache for everything that once was.  Having the animals on the island was a great comfort to him, as it reminded him of days at home on the farm. Early in the morning, the deer would come out of the forest to the watering trough, to drink in their fill. If he stood very quietly by the back gate, the deer would watch him cautiously, but not run away, taking their time till they all had their turn. Then they would all turn and take off in a synchronised group, back into the shelter of the dark forest at the back of the field. Once Ian had discovered the deer one morning, he had started the routine of filling the trough before heading to bed,to make sure there would always be enough water for the 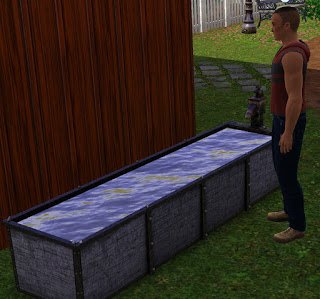 The raccoons around the farm were as raccoons tend to be. A nuisance and a lot of extra work to keep them under control. They were particularly fond of his mothers vegetable garden and she was forever down in the dirt muttering under her breath, as she tried to repair the damage of the visit from the night before.

Shaking his head at the memory, and realising how hot he was, Ian made his way to his cool and dark refuge for a shower and a bit of a late supper. Sitting in the quiet room, his newspaper already read for the day, Ian felt a bit discouraged. I have to be doing this all wrong, he thought. I’m a farmer and a fisherman, I should be doing better than this. And then it came to him. He was doing it all wrong!

“I’m fishing during the hottest part of the day when I should be sleeping!” he said to the air and threw his hands up in disgust.  He gave himself a little mental slap for being so foolish.  All those years of fishing with his father and they always started while the day was still night.  How could I have forgotten such a basic lesson my father taught me, he thought. He looked at the time on his phone and tried to determine what time he should be waking and then sleeping in order to try a new routine.  He decided that going to bed just after supper and waking around three in the morning would give him enough time to accomplish all he wanted to do in a day.

‘So if I get up and fish till first morning light, scavenge and scuba dive till noon, I can paint or write in the hottest part of the day till supper.  It’s a perfect plan.’

So feeling a little sleepy anyway, he tucked himself into bed and slept till one in the morning when he was woken by a very nasty thunder and lightning story.  Great start to a new plan, he thought.  But not wanting to waste any precious time, Ian began painting a picture in hopes that the storm would end and he would still be able to fish. 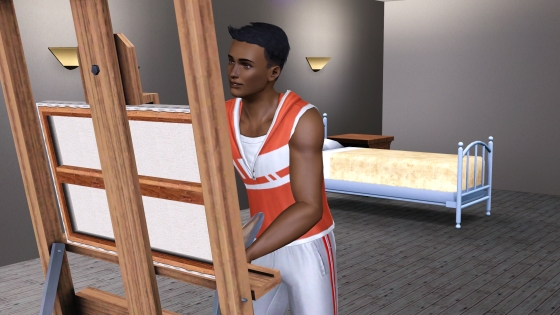 He also had high hopes that the waves would wash in great things to scavenge for that would be worth some money.  By the time he finished the painting, the storm still raged on.  He sent the painting to the shipping box and began painting another, grumbling the whole time at mother nature and her prerogative for destroying best laid plans.